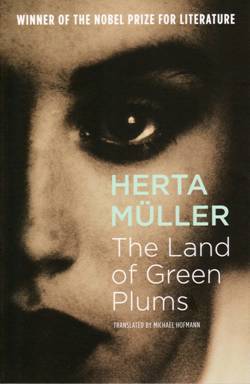 How true is this opening line?

When we don’t speak, we become unbearable, and when we do, we make fools of ourselves.

Ms. Muller opens and closes her novel, The Land of Green Plums, with this line so she must thinks it’s important.  It must be the key her novel’s theme.

What meaning can we find in it?  How different is the thought behind it from Mark Twain’s comment “Better to keep your mouth closed and appear foolish, than to open it and remove all doubt.”  Mr. Twain speaks of how others will view us, while Ms. Muller speaks of the price we must pay for choosing to speak or to remain silent.

The Land of Green Plums concerns a young woman sent from the Romanian countryside to attend school in the city during the closing years of Nicolae Ceausecu’s dictatorship.  As the novel follows her life and the lives of her friends, we see how all four are affected by the suicide of one, Lola, who hangs herself after realizing none of the school’s authorities or the police will take action against the gym instructor who is sexually abusing her.

If we don’t speak about things like this, how will that secrecy affect us, asks the opening line.  How does the collective weight of all our silences damage us?  There is a pop-psychology notion in America that we are only as sick as our secrets.  If this is true, then the Romania of Ms. Muller’s childhood was one very sick place.  Her novel gives the reader a clear sense of the big picture by focusing on the specific smaller ones of her character’s experiences.  The daily grind of life under Ceausecu, the constant threat of surveillance, the lack of freedom, the lack of opportunity, were all mundane facts of life in Romania for Ms. Muller’s characters.

After Lola’s death, the narrator and her close friends all fall under the suspicion of government agents, though I missed whatever it was they did to be considered anti-government.  This may be the point.  The interrogations and the surveillance they endure seem pointless because they probably were.  They were students who wrote a few poems that some might consider radical.  It’s difficult to see why any functioning government would consider them a threat.  But they are seen as threats, so much so that they all end up applying for passports to leave the country of their birth knowing they will never return.

But if they tell their stories, they only seem foolish.  The characters themselves do appear a bit foolish by the end of The Land of Green Plums, but it’s the government itself that really comes away looking bad–the government and the people of Romania who acquiesced to it for so long.   If we read the narrator as a stand-in for Ms. Muller and the novel as a portrait of the artist as a young woman, which I think is a justified reading, then the book is the author’s reply to the opening line’s question.  Better to speak, on some level, than to remain silent, even though Ms. Muller had to flee Romania in order to speak freely.

Maybe that is the point Ms. Muller is leading us to–that we must face this push-pull between needing to tell the truth about ourselves and our fear that doing so will make us look bad.  Can we face what really happened when doing so means facing our own complicity in a history we’d like to deny whether that history be personal or cultural?  By writing The Land of Green Plums, Ms. Muller answers in favor of speaking, though the price be high.

It’s been many years since I read this book for review on my old blog Ready When You Are, C.B.  In all honesty I remember nothing about it at all. From reading this old review it sounds like it would make for interesting reading today with all that is currenlty going on in America.  This notion of whether or not to speak and the price you’ll pay for speaking, seem all to relevant today.