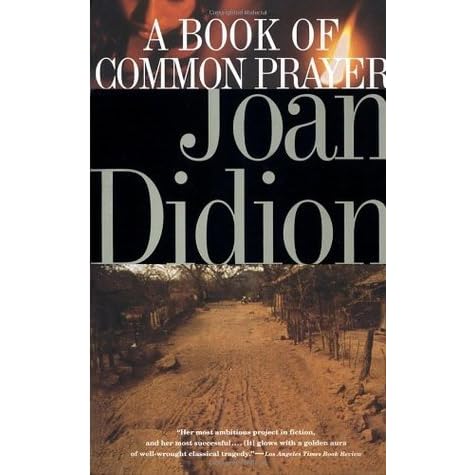 A couple of weeks ago I renewed my subscription to Netflix, just in time to catch the new documentary about American author and essayists Joan Didion.  It’s an excellent tribute, very entertaining.  C.J., who normally only watches You Tube videos about old English houses, loved it. He was even inspired to try reading some of Ms. Didion’s essays.

And I was inspired to pick up the copy of A Book of Common Prayer that has been siting in my TBR stack since our trip to Brooklyn last June.

The story concerns an American woman from California, Charlotte, who has gone to the fictional Central American country of Boca Grande to escape from the F.B.I. who are investigating her daughter, Marin.  Charlotte hopes Marin will join her, but Marin has basically turned against her mother, her family and all the bourgeoisie they represent.  This was not uncommon in America during the 1970’s.

The narrator of A Book of Common Prayer, Grace, is a long time friend of Charlotte’s who is trying to understand what happened to her friend, why she did what she did by running to Boca Grande and staying on there much longer than it was safe to do so.  Grace moves the narrative back and forth in time, each short chapter centered on an event that may appear important or inconsequential, as she tries to make herself and her readers understand Charlotte.

It’s a little confusing. While I believed both Charlotte and Marin as characters, along with the rest of the people in A Book of Common Prayer, I can’t say I ever came to understand them. Which may be the point. I don’t think Grace ever figured them out either, in spite of all her trying.

I did enjoy the book. Ms. Didion’s voice is as present and as entertaining as every. She knows how to tell a story well. But I felt like it never landed in the way some jokes never land. A that that never lands can be well told, can be funny, but it doesn’t pack a punch, doesn’t actually make the audience laugh.  That’s how I felt here. A Book of Common Prayer is well told, well written. I can see that a great writer is at work. But the punches didn’t land. The audience, me, never felt the emotional reaction one expects in a good novel.

I do intend to read Ms. Didion’s other famous novel, Play it as it Lays some day, but if you’ve never read her and you’re feeling inspired by the Netflix documentary, which you really should watch by the way, I suggest starting with her first collection of essays Slouching Towards Bethleham. C.J. is really enjoying it so far.

7 thoughts on “A Book of Common Prayer by Joan Didion”