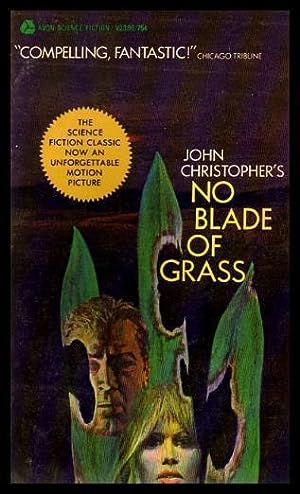 There world has been coming to an end since 1956.

There has been an explosion of dystopian futures of late.  If you wandered around any Scholastic Book Faire this year, you saw that just about one out of ever four titles in the fiction section featured some kind of horrific future.

It’s oddly comforting to realize that this is really nothing new.

The end of the world is an old trope in science fiction; it was nothing new even in 1956 when John Christopher wrote his novel No Blade of Grass (called The Death of Grass in the United Kingdom.)

No Blade of Grass disturbs as it entertains.  Even the premise is disturbing.–we don’t need something drastic or complicated to bring about the end of the world, all we need is a naturally occurring virus that kills something as simple and basic as grass.  There is no complex scientific experiment gone wrong nor a rouge government bent of world conquest nor any sort of re-animated dead.  Just a virus.  Just grass.

While John Christopher’s novels take place against a backdrop of cataclysmic world events they are all focused on people.  In the case of No Blade of Grass, Mr. Christopher tells the story of David and John, two brothers.  David inherits the family farm, located in an idyllic valley far removed from urban London where John lives with his wife and two children and works as an engineer designing large construction projects.  The two couldn’t be more different.

When word of the virus attacking the rice crop in China comes, David asks John to move his family to the farm.  David, who has no children, has come to love his niece and nephew as his own and fears for what will happen to them once the virus spreads enough to reach the British Isles.  John insists that someone will find a way to stop the virus, and stays in the city.  The virus spreads, of course, and when a colleague of John’s learns that the government plans to destroy the urban centers as a way of reducing the population enough to leave only those who can be fed, John leads his family and a small group of friends out of London and across England to David’s farm where they all hope to be safe.

Very quickly John and the members of his group realize that if they are to survive, they will have to resort to extreme means.  They quickly sink into what can only be labelled as barbarism. In one scene they come across an isolated farmhouse where they hope to find food and shelter.  Almost as soon as the farmer opens his door in response to their knock, John shoots him dead.  They enter the house to find his wife screaming in terror and shoot her as well.  When they later find the couple’s young daughter hiding in her upstairs bedroom it is only the intervention of John’s horrified wife that forces him to offer the girl a chance to join their group.This is not how I expected the hero of the story to behave, but it is completely believable.  Contrast this with the noble father of Cormac McCarthy’s The Road who tries to protect his son and to set an example of goodness for him amidst the fallen world they live in.  Mr. Christopher’s hero wants his children to understand that they will all have to do horrible things if they are to survive.  His portrayal of how these characters quickly become barbaric is disturbing and believable.  Which made it even more disturbing.

It’s not easy to find a copy of No Blade of Grass in the United States these days, in spite of the recent explosion of end of the world fiction, but it is well worth the effort.

In the years since I first ran this review on my old blog Ready When You Are, C.B., I have become both very tired of and very skeptical of the central premise in nearly all post apocolypse fiction. Namely the notion that once civilization falls we all violently turn on each other.  In fact, humanity has survived over the years becuase of how well we cooperate with each other.  This is not to say that there are not bad people, that all would be rosy, but we know what happens when things go wrong because things have gone wrong over and over again throughout our shared history.  There certainly are looters, sometimes lots of them, but there are an equal number at least who help as best they can. I’ve seen this myself after the San Francisco earthquake of 1989.  People helped eachother. People cooperated with eachother. They did this with no expectation of reward. But that would not make for a very dramatic novel.