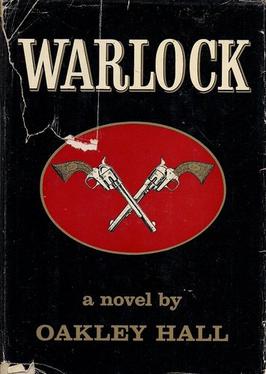 Oakley Hall populates his novel Warlock with an entire town full of characters, the way Charles Dickens does, or more apropos the way Pete Dexter did in his western Deadwood.  While there is a central plot with its handful of major characters, Mr. Hall takes the time to bring each minor player to life, enough to fill his small Arizona town of Warlock with a memorable populace.

Like Pete Dexter’s Deadwood, and the television series that was probably based on it, the main plotline of Warlock centers on a gunslinger attempting to go straight as the town marshal.  Clay Blaisedell, who is loosely based on Wyatt Earp, is hired by a citizen’s committee made up of the moneyed property holders of Warlock.  They need someone to keep the locals in line and to prevent the nearby gang from further robberies and rustlings.  But Blaisedell soon finds that the citizen’s committee also wants him to keep people they deem undesirable out of town, even if those people haven’t violated the law.  After he is forced to fire upon men he later finds innocent, he refuses to remain the town’s marshal, stepping aside in favor of Deputy Gannon, another former gunslinger.

Blaisedell and Gannon are soon set on a course of conflict that will inevitably lead them to fight each other as they try to maneuver between the citizen’s committee that wants to control them and the townspeople who either worship them as heroes, fear them as villains or envy them as rival gunslingers.  That both men want a peaceful town, won’t help either of them in the end.  Too many people have too many conflicting demands on them.  I desperately want to tell you what happens in the final shootout, but I can’t. I will say that it took me completely by surprise; it’s unlike anything I’ve ever read before; I loved it and I so should have seen it coming.

Into this more-or-less typical scenarios, Mr. Hall introduces a cast of supporting characters centered around the local mine and the minors who attempt to form a union.  The citizen’s committee demands the sheriff drive the union agitators out of town, but he refuses as they have done no wrong in his eyes.  This is but the first in a series of events that will culminate in a showdown between the minors and the army, brought in from the nearby territorial capital at the mine owner’s request.

Warlock is an excellent novel for the way it explores the complexity of what is morally right in a place without law.  The citizen’s committee has no real legal standing–they are simply the ones with enough money to hire the best gunslinger.  Blaisedell and Gannon both are as dirty as the outlaws they attempt to keep in control.  They’ve just switched sides sooner.  Gannon’s brother fell to Blaisedell’s gun just before he became deputy.  That he did not seek ‘justice’ for his brother has put Gannon under suspicion as far as many in Warlock are concerned.

There is an element of romance for both Blaisedell and Gannon, though here the novel is arguably at its weakest.  Blaisedell is in love with the “Angel of the Mines.”  A local woman who runs a boarding house for miner’s that doubles as a hospital for them when needed.  She functions as the woman on a pedestal much the way so many women did in 19th century fiction.  Through the example of her goodness she hopes to redeem many of the men in town.  Gannon is in love with a former prostitute who has come to town hoping to see Blaisedell gunned down at last.  She cannot kill him herself, but she wants to know that the man who killed her brother has finally met his end.  She is not above trying to manipulate Gannon into killing Blaisedell for her.

The two are such obvious Madonna/whore characters that many readers may find them trying.  But if you can look at them not as stereotypes but as explorations of stereotypes, you’ll find both have much to offer, both are fully developed characters, both speak to something profound, a desire for security or a desire for the sense of quietess justice might bring but never does.  It’s a tribute to Oakley Hall that what should be charactertures become memorable characters.

Lots of people avoid westerns for reasons I don’t really understand.  Warlock is among the best I’ve read to date.  If I still gave stars, I’d give it five out of five, maybe four and half.  Butcher’s Crossing is still my all-time favorite, but Warlock will hold certainly hold its own.

It’s been a while since I read Warlock for my old blog, Ready When You Are, C.B. but I still remember it as a favorite read. However, I have completely forgotten the shocking shootout mentioned in the review above.  Luckily, I have saved my copy of Warlock to re-read in retirement which is only 12 years away…..