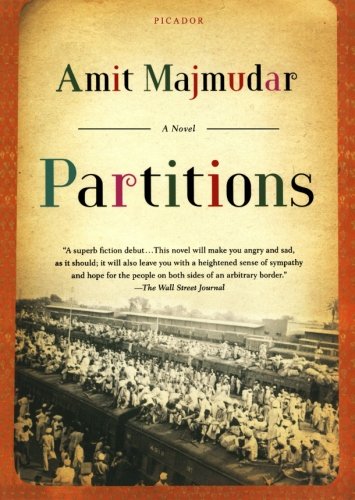 It’s very difficult for me to imagine let alone understand the animus that led to the partitioning of India and Pakistan in 1947 following the withdrawal of British authority from the subcontinent.  The violence that accompanied partition defies understanding.  One can only ask how could this happen without the expectation of an answer.

To his credit, Amit Majmudar does not seek to explain that violence  in his novel Partitions.  Instead, he presents a portrayal of three sets of people, two Hindu brothers trying to find their mother and flee Pakistan, a Muslim doctor driven out of India and a Sikh girl forced to flee her doomed family for the home she hopes to find at the Golden Temple of Armritsar.

What emerges from the novel is a portrait of the chaos that followed partition.  Millions of people forced to leave their homelands, most unable to take anything with them, many facing violent opposition both driving them out and trying to stop their escape.

It’s hard for someone living in the Bay Area in 2011 to understand what happened.  What could drive someone to light a ten-year-old boy on fire?  How could anyone participate in gang raping a pre-pubescent girl?  Why would anyone drive out the local doctor who brought generations of children into the world?  It’s probably just as hard to imagine  for many people living in South Asia today as well.  The past is a foreign country after all.

C.J. is reading Angels of Our Better Nature by Steven Pinker.  Mr. Pinker’s thesis is that violence has been on a steady decline throughout human history.   From the details C.J. has passed along to me, Mr. Pinker makes a strong case.  We think of the 20th century as an incredibly violent time period.  Two world wars, the Holocaust, the Stalinist purges, the Killing Fields of Cambodia, all make the partitioning of India look like a relatively minor bad patch.  Mr. Pinker argues that over the scope of human history, the 20th century wasn’t really all that bad.  He makes a very good case, too.  I hope he’s right.  I hope the violence that occurred in Partition and in events like it will soon be strictly the stuff of novels.

After reading Mr. Majmudar’s novel, I cannot boast a better understanding of either why partitioning happened nor why so many people behaved so abominably during it.  I can say  that I have a better understanding of what it was like to live through that event.  By presenting four characters who survived events none of them understood, Mr. Majmudar gives his readers what every good novelist does, a bit of insight into the lives of others and a slightly greater sense of community with the human race.  I know I’m venturing into territory even I would label as cheesy, but Partitions moved me much more than I expected.   That’s a fitting tribute to those who went through the partitioning of India, and to those who didn’t survive.

I first ran this review on my old blog, Ready When You Are, C.B.  the date listed above 2011 is not a typo. Since then we don’t hear that much about Steven Pinker’s book.  I confess, I never did get around to reading it myself, though C.J. told me so much about it I’m almost willing to count it as ‘read’.  I suspect I’m much more likely to give Partition another try.  It was a wonderful book.

One thought on “Parititions by Amit Majmudar”