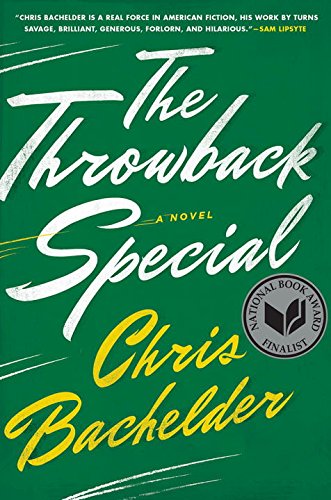 How to find a place to begin when you’re confronted with something that’s not like anything you’ve read before?  When you’ve been reading for nearly 50 years, this doesn’t happen all that often which doesn’t make starting any easier.

I could say Chris Bachelder’s novel The Throwback Special is a book about sports, but like the other great sports books I’ve read, it’s not really about sports.   It is about football, but ootball is just a means to an end, here.

All of the 22 or so characters in the book are middle-age men, almost all of them white men, which made me feel a little guilty about reading it for some reason.  We’re supposed to be reading books about people not like ourselves, aren’t we?  I worry about how well a book about middle-aged white men will do in the Tournament of Books which I’m following closely this year for the first time.  I only read The Throwback Special because it made the final cut for the tournament’s short list.

If it had not been listed for the Tournament of Books, I probably never would have read this book about 22 middle-aged white men obsessed with a single 5-second play they all saw live on Monday Night Football 16 years ago.

I would have missed out.

The men all gather each year at a nondescript strip-mall like hotel, one like all the others you find throughout suburban America, to re-enact the Throwback Special, in which Washington Redskins quarterback Joe Theismann’s leg was broken so badly that he never played another game.

Mr. Bachelder’s novel floats from character to character as each of the men arrive at the hotel.  We get some of their back story, some of their thoughts, some of what brings them back to the hotel year after year, but we never find out how this entire ritual began.  They all seem to only know each other through this annual re-enactment.  But that didn’t matter to me at all.

Each man seems to be at a crossroads in life. A marriage that has not gone as hoped for.  Children who didn’t grow up to become what they promised to be. Career regrets. Lost relationships.  Aches in places where they used to play, as Leonard Cohen said. More than a few of them men are questioning why they go through this annual meeting at all.

I’m not doing a very good job conveying why I loved this book so much here.  I’m not really sure why I loved it.

I loved how well the author conveyed the nature of male friendships, how so much of it is performance.  They all seem to be great friends, very close, but so few of them really know what’s going on in each other’s lives. The talk but they don’t talk, connect without connecting.

There are three men for example, who all go outside by the dumpster to smoke one evening.  They’ve been doing this for 16 years.  Over the past few years each of the men has quit smoking, but none of them can bring themselves to admit this to the others.  They each feel like they would be letting the other two men down, breaking the bond that holds them together by ending this one connection. So they all end up standing there asking if anyone can give them a cigarette since none of them have a pack without them of course.  They all wind up bumming cigarettes off of a hotel employee who comes out to empty the trash. While this is both funny and kind of sad, I think it illustrates the nature of many relationships. We build them around whatever we have at hand when we can’t build them around things that really matter. When the connections cannot be based on something deep, they must be based on something shallow.

By the time the night of the actual re-enactment came along, I was excited to see what would happen.  I don’t care about sports at all, but good sports writing always captures my interest.  The men all spend the afternoon before the “game” preparing for their roles, studying the game footage, reviewing what happened that night and what each player went through before and after the event.  Each man will re-enacted the movements of and actual player so they have to know exactly what to do.  All this for five seconds of action.  But, I have to admit, by the time that re-enactment came along, I was excited to see it; I was thinking about how much I would like to know more about Joe Theismann and what really happened that night.

Mostly, I loved the writing itself.  I don’t say this often, but I found each sentence excellent, writerly but not forced.  The book I’m currently reading for the Tournament, which I’ll review later, relies heavily on the simple declarative sentence.  It’s very straightforward writing.  Economical.  Mr. Bachelder doesn’t go to Henry James extremes but reading his writing is reading someone who is very good at writing and willing to celebrate it for its own sake.  Reading The Throwback Special is putting your reading in the hands of a writer who knows his craft inside and out.

This rambling review has not done the book justice.  At its heart, is a strange little story, almost a non-story, that touched me and has stayed with me.  While I think it’s clearly an underdog, I hope it does well in the tournament.

I’d love to read it again some day.

2 thoughts on “The Throwback Special by Chris Bachelder”