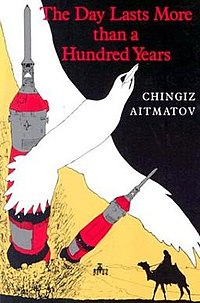 Burannyi Yedigei, the hero of Chingiz Amitiov’s novel The Day Lasts More than a Hundred Years, has spent his entire adult life on  the steppes of Central Asia in Soviet Kazakstan.  The small village where he lives with his wife and children is made up of railway workers, there to maintain an important junction connecting the east with the west.  Trains run past their small homes day and night, rarely ever stopping at all, and when they do not for long.

The novel opens with the death of Yedigei’s life long friend Kazangap. Yedigei insists that Kazangap will have an honorable funeral in his ancestral cemetery a full days trip from their small village.  He manages to get enough people and equipment released from work on the railway to give Kazangap the burial he deserves.

Yedigei leads the procession atop his prized camel, Karanar, which is fully adorned for a ceremonial parade.  He is followed by a second villager who rides a tractor with a trailer carrying the body of Kazangap as well as Kazangap’s son who has returned to the village from his life in the city to bury his estranged father.  They are followed in turn by a final villager who drives an excavator which will be used to dig Kazangap’s grave and by Kazangap’s yellow dog who trots along refusing to leave the side of his master.  This odd procession starts out one morning across the desert steppes of the Soviet Union.

Along the way, Yedigei recalls the major events of his own life– friends he lost, women he loved, sons he might have raised.  And here and there the narrative is interrupted by accounts of a Soviet/American space mission which has made contact with an intelligent race from another solar system.  The rockets light up the night sky interrupting Yedigei’s life at several key points because they are launched from bases hidden in the steppes of Kazakstan.

Does this have anything to do with your life?  Is there any part of it you can identify with?  If you answer yes to these questions are you more likely to read The Day Lasts More than a Hundred Years than you would have been if you had answered no?

It’s my belief that most readers are looking for themselves in what they read.  Even when they read about a culture alien to their own, what delights us is finding out how much we have in common with other people.  How much alike we all are.  But what if we don’t have much in common?  What if the book represents a culture not just alien to ours but in opposition to it?

Yedigei is not concerned with philosophical questions like this.  He is a man dedicated to the problems in front of him.  How to bury his friend properly, how to keep the trains running,  how to be a good husband, how to keep the members of his village safe and sound, how to preserve the memory and traditions of the past.  He rarely thinks of anything or anyone beyond the horizon unless it is to tell a village child about his own youth spent fishing on the Aral Sea or to wonder whatever happened to those villagers who moved away.

I know I like it for the image Mr. Aitmatov has painted of Karangap’s funeral procession– a camel in full ceremonial regalia, a tractor pulling a trailer with a coffin on it, an excavator and a yellow dog as they all cross an endless desert.  Nor can one disregard the image of Yedigei on his camel at night shocked to find the sky aflame with Soviet rockets heading towards space and first contact with intelligent alien life.

That’s pretty darn good, if you ask me.

And it carries my question out away from earth itself.  If contact was made with life from other solar systems, would we continue to look for what we have in common, seeking to find ourselves in others as we’ve done here on earth for so long?  Could we accept a culture that shares nothing in common with our own?

It feels a little strange to revisit this book today when so much of America is focused on how much the Russian government has done to influence our recent presidential election. Whether or not Putin and Trump have been in collusion has nothing to do with this story of life on the steppes of central Asia, but it can’t help but cloud things a little.  I’ve had The Day Lasts More than a Hundred Years on my “To re-read in retirement” shelf for several years now, but I find my eye drifting towards it of late.  I may not be able to wait another five to ten years before I give it another go. I loved it.