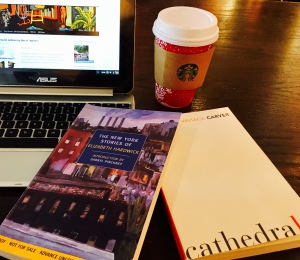 I know it’s a cop-out, but I can’t really pick a best this time.  Raymond Carver and Elizabeth Hardwick are both masters of the short story.  Anyone who loves the short story should read them both, read as much of them as you can.

For this round I read “A Season’s Romance” and “The Oak and the Axe” by Elizabeth Hardwick and “Where I’m Calling From” and “The Train” by Raymond Carver.

I’ve come to the conclusion that Elizabeth Hardwick was probably a minor character in Sylvia Plath’s novel The Bell Jar.   The Bell Jar is set in the fashion magazine world of New York in the 1950’s and 1960’s.  Plath’s characters are all very smart, talented young women trying to find success in a world that is largely stacked against them.  Hardwick was probably the witty girl who sat next to Plath constantly telling stories about the people she met at the party last Saturday night.

Her characters live in this same world. They charm, they entertain, they keep a sardonic eye turned on the world and they have a dose of pathos underneath it all.  I’ve come to enjoy spending time with them very much.

This time around, I confess, it was one too many characters with a drinking problem for me in “Where I’m Calling From.” I just was not in the mood.  But the second story, “The Train”,  a sequel to John Cheever’s wonderful short story “The Five Forty-Eight,” won me back into Carver’s camp.  In “The Train” the secretary who has just threatened to kill her boss after he has both dumped and fired her post affair goes back to the train station. There she waits for the next train back to the city with the only other two people in the station a strange elderly couple.

It’s one of those Carver stories where a set of disparate people meet under unusual circumstances.  Nothing seems to happen, except they all come to an understanding/epiphany.  They realize they are connected, have been connected for a long time, though they never knew each other before now.  I was reminded of “A Small, Good Thing” from earlier in the book.

So who wins this round? Who advances to the finals?  Who do I want to read more of right now?

I only have three stories left to go in the Carver book.  There are seven more in the Hardwick.  So, since there is just the one final round left, I’m going to go with Raymond Carver.  I’ve enough stories left in the Hardwick to enter it in The Tournament of Short Stories III.