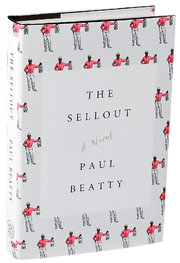 wo days after I gave up on Paul Beatty’s satirical novel The Sellout, it won the Mann-Booker Prize, the first American novel to do so.

My general rule of thumb is that the books on the long list that don’t win the Man Booker Prize are generally much better reads than the winner is. I have not read the rest of the long list, so I can’t say if that rule holds true this time around, but my money is on yes.

I hope someone who made it through The Sellout can let me know if the rest of it, I only made it to page 50 or so, turned out to be a play on Ralph Ellison’s Invisible Man or not. I had a feeling that it was going that way.

I had two problems with The Sellout.  First is the shear density of the writing.  Every line is packed as packed can be.  I felt like I the narrator was one of those fast talking comedians who go on long rants that leave the audience breathless from trying to concentrate on getting every reference so they don’t miss a single joke.  That’s great. For about seven minutes. But for an entire novel?

My second problem was with language.  I know full well what Mr. Beatty is up to and I know that this requires the use of certain terms, but I just can go there anymore, not even when it’s funny.  The Sellout is funny, by the way.  Earlier this year I gave up on Billy Flynn’s Long Half-time Walk because over the use of “faggot” in the dialogue.  This was totally natural dialogue, just how you would expect a group of young soldiers to talk when no one important was listening.  It wasn’t even all that homophobic in context, just casual homophobia, literally locker-room talk. But I don’t need that in my reading life anymore.

The Sellout has the same issue.  I gave it an honest go, but enough is enough.

Just before giving up on The Sellout I gave up on Nobel Prize winner author Patrick Modiano’s The Night Watch. Another satire, this time set in occupied France, The Night Watch features an over-the-top main character, a Jew who is gleefully collaborating with the Nazi occupiers.

Again, the writing is very dense.  Just about every line of the forty plus pages I read referenced some aspect of French culture, history or literature, tearing them all down.  I understood a few references but I suspect most non-French readers will have a very tough time with The Night Watch.  Page after page of multiple references I didn’t understand about people I’d never heard of before.  I suspect many French people find this challenging reading.

Which brings me to my second rule of thumb about award winning literature–Nobel Prize winners are always great writers, but their books are usually very difficult reading.  That was certainly the case with The Night Watch.