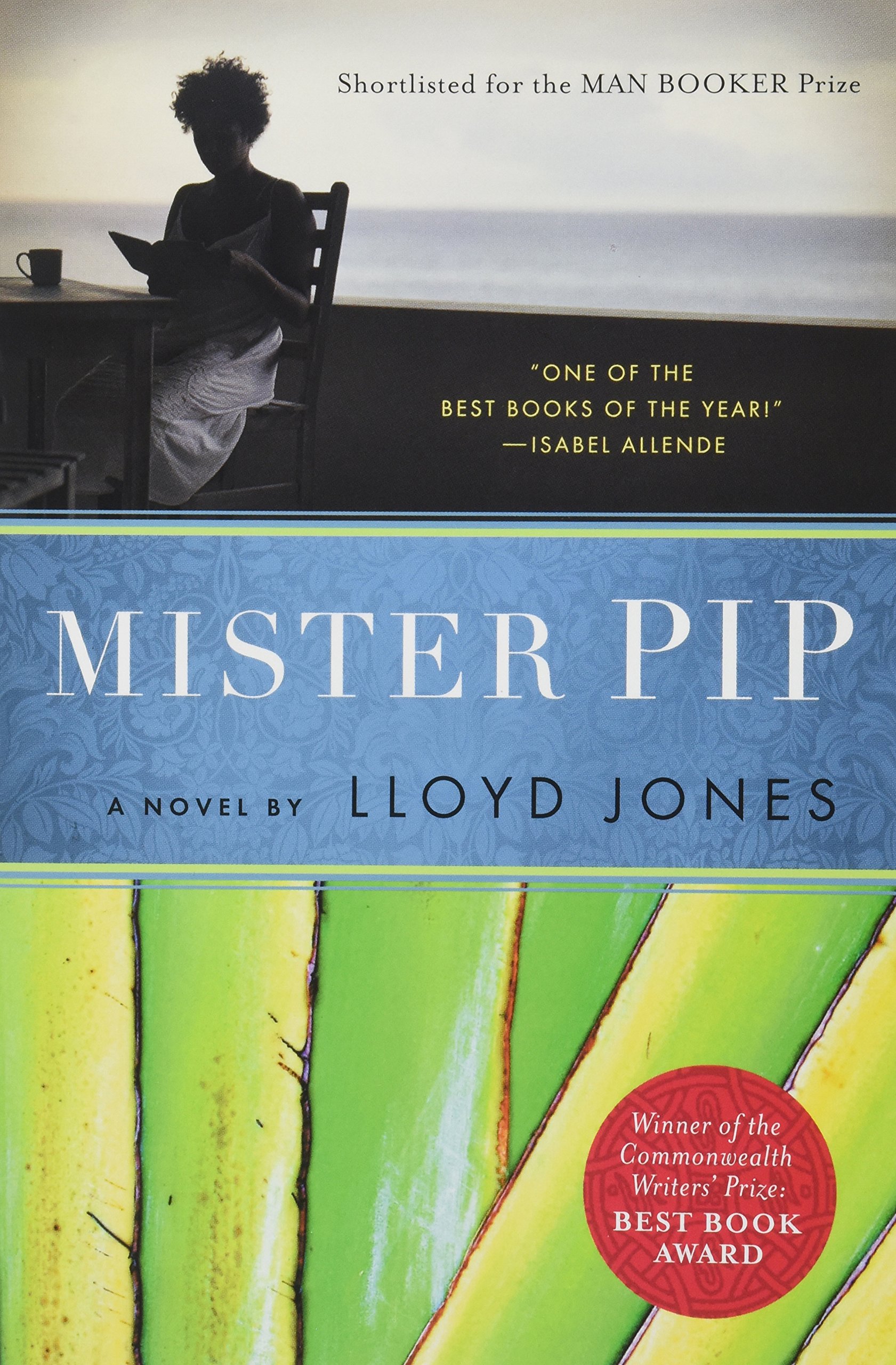 There should be a designated sub-genre for books about books, a German word for it at least.  Like Bildungsroman.  Our new “German word” novel will be defined as a work of fiction where-in the reading of a particular book figures heavily as a plot element or forms a part of the overall narrative structure.

In Mister Pip by Lloyd Jones the love of literature can change your life, save your life, or cost you your life.  An entire village is destroyed because of one classic novel.  The power of literature.

Matilda, the narrator, lives with her mother in their village on one of the Solomon Islands during the 1980’s, a time of civil war.  The women and children who remain at home while most of the village men have gone off to find work or to fight in the war are isolated from world events and most of modernity.  They have little knowledge of anything beyond their own village.  Until Mr. Watts, a white man who married one of the village girls when she went away to college, takes over the teaching duties in the village school.  He brings some knowledge of math and science and a battered copy of Charles Dicken’s novel, Great Expectations.  He reads one chapter a day to the students, stopping to explain the words and the world of Dicken’s England as he goes.  The children are enthralled.  So much so, that Matilda’s mother begins to fear she is losing her daughter to the stories of Mister Pip.

What begins as an amusing, charming story, in spite of its civil war setting, takes a turn for the violent when soldiers arrive.  I cannot go further without risking a spoiler except to say that identity will play a key role in the rest of the novel, just as it did in Great Expectations.

Which brings me back to the issue raised in the opening above.  If we can find the correct “German word” to go with our definition, we’ll need to come up with a set of exemplars, characteristics that help us evaluate how good a “German word” novel Mister Pip is.   I’m going to argue that it’s quite good.  On the surface, Great Expectations teaches Matilda a lesson about taking charge of one’s own destiny, about the possibility of becoming someone new, someone you choose to be.  Mr. Watts has done this himself by moving to the island village just as Pip did it by moving to London in Great Expectations.  Matilda will make her own attempt in the closing pages of the novel.

But closer inspection of Mister Pip reveals a much greater depth of connection with Great Expectations.  An excellent “German word” novel must do more than simply feature a character who reads and is moved by classic literature.  It must integrate classic literature into itself.  Mister Pip is full of connections with Great Expectations.  The more I look the more I find.  Each novel opens with a brief dissertation on how a main character came to have his unusual name.  Both novels deal with people who try to leave their early upbringing behind them.  Both novels feature a mother figure who tries to use a ‘daughter’ to get revenge on a man.  Both mother figures die by violence.  Miss Havisham dies from the burns she suffered when her wedding dress caught fire while Matilda’s mother is the cause of her village’s destruction by fire.  In both cases, each women brings about tragedy through their own stubborn behavior.  Matilda’s mother and Miss Havisham share the same character.  I could argue that Matilda’s mother is one part Miss Havisham and one part Mrs. Gargery, Pip’s hardened older sister who raises him ‘by hand.’  Both novels feature education throughout many chapters and in both education will alienate the protagonists from family members they love.  Both feature protagonists who must conceal the identity of a strange man who wants to help them.  Both feature an attempt to escape the authorities by boat in their closing chapters and both attempts end with the same result.

Now if the Germans will just come up with the right word.

This review first ran on my old blog, Ready When You Are, C.B.  Reading it now I wonder just where this would fall in the current debate of cultural appropriation.  Racial politics, social politics, identity politics, just who should tell what stories are all legitimate questions with Mister Pip.  As I recall, they are overtly dealt with in the story. It’s been a while since 2011 when I read and reviewed the book.  It would make for an interesting discussion.