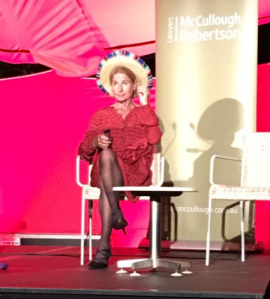 This post is more of a ramble than a rant, so don’t worry.

It’s been a busy week, getting ready for the 20th anniversary party C.J. and I threw yesterday, so there have not been many posts here lately.  I’m hoping to have a good amount of down time today, enough to relax and get a bunch of robo-posts ready for the week.

Some I’m going to do one of those multi-book posts today right off the bat.

I’ve been doing a lot of reading with my students this year which I’d fallen away from for some reason.  Between this week and last I finished three books. 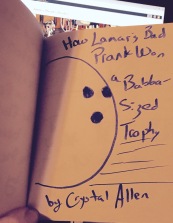 The first was Crystal Allen’s touching comic novel about a young bowler’s rivalry with his basketball star older brother How Lamar’s Bad Prank Won a Bubba-Sized Trophy.   This is the current favorite of one sixth grade teacher at my school.  I’ve a connection to it in that the author’s agent was once my student teacher.  She was a great teacher, too.  Sorry we lost her to publishing, but it’s certainly a been a boon for children’s books.

Next, Orbiting Jupiter by Gary Schmidt who wrote one of my favorite YA books in recent years The Wednesday Wars.  Orbiting Jupiter is a good book, I’ve no qualms about it’s quality, it’s characterization or anything really, except the ending.  I liked that the story presents a positive tale of foster parents.  I’ve several friends who are foster parents. The things they have done with the children they have known, the sacrifices they have made for their foster children make them heroes of the highest order in my mind.  I’m sick to death of “bad foster parents” being used as shorthand to explain why a 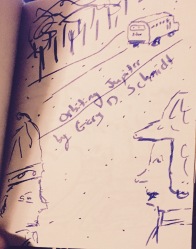 character is sad and lost in life.  Rant aside, Orbiting Jupiter has a tragic ending that I found gratuitous.  A happy ending would have worked just as well.  So, I won’t be passing this one along to the boy in my class who just got a terrific new foster dad after all.

Lastly, I read Chew on This, Eric Schlosser’s kid version of his best-selling Fast Food Nation.  Though I suspect his co-author Charles Wilson did most of the work for this version.  Chew on This was selected to be our first school-wide book, probably in January if the school board approves.  At our department meeting Wednesday, one of the teachers expressed some reservations about the book, so I went home and read the whole thing.  I think it’s fine, but we’ll see what happens.  I did read Fast Food Nation back when it first came out; even stayed away from fast food for several months afterwards.  Last month by blood test came back pre-diabetic so no more fast food for me, probably forever.  Except for an occasional trip to In-and-Out.  What’s the point of living in California if you never ever go to In-and-Out. 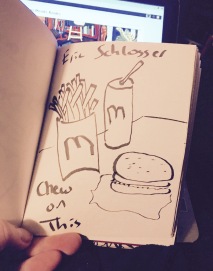 Chew on This will probably have a lot of appeal to our middle schoolers.  It’s non-fiction which the Common Core loves.  Each chapter focuses on one topic that will interest the kids–french fries, sodas, meat production, obesity, the history of MacDonald’s.  We’re hoping the math and the science departments will take a chapter or two. There’s plenty in it that applies to P.E. as well. The teachers new to our school who have used it before say it was a big hit.  There are some graphic sections about meat processing and a few other issues, but I did not see any red-flags.  We’ll see what happens.

I did read another round of short stories this week.  Patrick Ryan’s new collection The Dream Life of Astronauts has been struggling through my little tournament.  I’m a big fan of Mr. Ryan’s work, since I stumbled upon his first collection Send Me several years ago.  He also writes wonderful YA novels under the name P.E. Ryan.  Mr. Ryan did an interview, one of my favorites, with me back in the day when we all did author interviews as a regular thing.  But I had not fallen in love with his current anthology until this round.  In his story “Miss America”  the narrator gives us this paragraph about her step-father who is about to leave her mother after many years together:

The thing is, I guess I do love Roger.  My real dad died when I was a baby (he had a rare cancer, my mother told me, but she doesn’t like to talk about it) My first concrete memory of my mother is of her pitching a fit–I mean, screaming her head off–in the checkout line of a grocery store because the cashier wouldn’t take her coupons. She was always pitching fits when I was little. Then Roger came along when I was seven, and they got married, and she calmed down some. We moved into a new house, I got a bigger room, and we started buying real trees at Christmas. So I love him for that. But I don’t miss him, not really.  Maybe that makes me a cold person, or emotionally wounded, whatever a psychiatrist would call it. I don’t feel wounded, or like I need to choose sides. Roger was never mean to me, never once yelled at me, never even scolded me that I can remember; he was always just there: calm and reserved and focused on some inner thought, like the most patient man in the world waiting for an elevator that would take him to some other floor–and then the elevator arrived, and he got on.

This is Mr. Ryan at his best.  He gets at the heart of three characters giving us a clear picture of how they relate to each other and just how complicated what looks at first like a simple relationship really is.  I’m looking forward to the rest of the book.

But this means the very good stories in The Pinch will go back on the TBR shelf for now.  I’ve enjoyed this literary journal from the students at The University of Memphis.  They’ve won me over to college literary journals in general.  I’ll be looking for more.

Finally, hasn’t Lionel Shriver been fun this week? As RuPaul would say, “Girlfriend, Please!” I posted links to her speech on the perils of “cultural appropriation” and to the response to it last week, scroll down to find them, but I had no idea she was wearing a sombrero while she spoke.  After fifteen seasons of Project Runway and eight seasons of Drag Race, I like to think I would have walked out on her to protest her bad taste in fashion.

While I do love a literary kerfuffle, at this point I think she should exit the stage as gracefully as she can.  Go write another book, that’s what you do best.  We Need to Talk about Kevin  proved this. You can read her latest comments in the New York Times which struck me as mostly wrong.  There’s also another response in the Washington Post from the book critic who started all this by not liking Ms. Shriver’s new book dystopian novel The Mandibles which sounds awful.   I try not to comment on books I have not read, but I also try not to read “literary authors” who dabble in science fiction and I’m on a break from dystopias for the next couple of weeks.  I think Jia Tolentino writing in the New Yorker does a very good job with this topic and with Ms. Shirver.

A common lesson in every fight about cultural appropriation is that no one appears to be changing anyone else’s mind. Shriver wanted her detractors to be less touchy, and instead she reinforced their position. The Brisbane Writers Festival’s response to Shriver will, in turn, underline her conviction that free expression is being stifled. On this topic, as on most, audiences self-sort after every flare-up; opposition convinces us, over and over, that we are right.

Opposition convinces us, over and over, that we are right.  Unfortunately, the longer I live the more this seems to be true.  Still, from a reader’s perspective, a good literary battle is a good thing to have once in a while.  I still miss Gore Vidal and Truman Capote who two champions.

But I do hope we can all agree to stop it with the funny hats.

6 thoughts on “Sunday Salon: Catching up with This Week’s Reading and Lionel Shriver Wears a Funny Hat.”