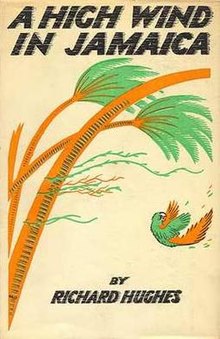 Children are evil.  Not evil, but so amoral in their innocence that their actions are sometimes difficult to distinguish from evil.

Richard Hughes examines this supposition in his comic novel A High Wind in Jamaica.  Set at the end of the 19th century, when steam ships were beginning to replace schooners, something that worries the novel’s pirates, A High Wind in Jamaica is the story of a group of children kidnapped by pirates while on their way to homes in England.  Which group will turn out to be closer to the barbaric nature of uncivilized humanity: pirates, or children freed from proper adult supervision?

The Bas-Thornton’s have raised their children on a ruined sugar plantation in Jamaica where Mr. Bas-Thornton has a ‘business of some kind.’  Mrs. Bas-Thornton has not tried to maintain any sense of proper decorum.  Instead her children, three boys and two girls, have been left to themselves, much to their delight.

It was a kind of paradise for English children to come to, whatever it might be for their parents: especially at that time, when no one lived in at all a wild way at home.  Here one had to be a little ahead of the times: or decadent, whichever you like to call it.  The difference between boys and girls , for instance, had to be left to look after itself. Long hair would have made the evening search for grass-ticks and nits interminable: Emily and Rachel had their hair cut short and were allowed to do everything the boys did–to climb trees, swim, and trap animals and birds: they even had two pockets in their frocks.

After an earthquake followed by a hurricane which destroys much of their home, the Bas-Thornton’s decide to send the children back to England for their safety.  Two months later, the Bas-Thornton’s receive a letter from the ship’s captain–their children have all been killed, murdered by pirates who raided the ship shortly after they set sail.

But the truth is that the children willingly went with the pirates who afterwards found no one would take them off their hands.  Over time, the pirates become attached to the children and, for a while, keep them on-board ship enjoying their company.  The children quickly adopt the pirates as surrogate parents, big brothers really.  They are enthralled by the ship’s monkey.  They become attached to both of the pigs kept on board for future use, treating them as foot cushions, thrones, and horses.  The youngest girl, Laura turns everything she finds into a baby doll she can stash in it’s own ‘home’ somewhere on board.  (In the end she’ll try to take them all with her, fighting the cook over a soup ladle baby she can’t bear to be parted from.)   Her brother Edward is overjoyed at his good fortune; he gets to be on a pirate ship without even having to run away from home.

It all appears very innocent, but Mr. Hughes is interested in darker aspects of childhood.  Early in the novel one child, John falls to his death while everyone is on shore.  That night the children look at his empty bed wondering what to make of it.  Afterwards, no one mentions John at all.  He is forgotten by the children until their mother asks where he is once they are rescued.  Emily, the captain’s favorite, is devoted to him until  one night when he has too much to drink he looks at her in a way she does not like.  After that, she turns against him, which is understandable, but through her innocence she later exacts a terrible revenge which the captain does not deserve.

A High Wind in Jamaica is a book about children, but it is not a book for children.  Mr. Hughes enjoys the games and frolics of his child characters, but his sympathies lie more with the pirates.  They  are taken in by the children, the pirates find they are unable to properly civilize the children who find the absence of civilizing parental guidance a ‘kind of paradise.’ When it becomes clear that the children cannot stay on board any longer, the pirates must decide what to do with them.  A true pirate would toss them in the sea, which is suggested, but the captain has become too fond of them to do this. Instead, he will see them safely placed which will lead to his downfall.

I entered into reading A High Wind in Jamaica expecting an adventure novel, which I got.  There is plenty of adventure to be found in Mr. Hughes’s book.  There is also a very adult look at the nature of innocence and the amorality inherit in it.  A High Wind in Jamaica was much more than I expected, and I expect it will be in contention for my list of favorite reads in 2011.

After nearly six years since I first ran this review on my old blog, Ready When You Are, C.B., I remain a big fan.  I loved this book and have tried to push it on several people with no success so far.  I stand by this review, which has me wanting to read it again. The only thing I’d like to add, or to clear up really, is that the pirate captain did nothing more than look at Emily in a way that made her uncomfortable.  Above it sounds like something more may have happened, but it didn’t. He paid a very heavy price by the end.

4 thoughts on “A High Wind in Jamaica by Richard Hughes”