The detective arrives in a small seaside California town looking for a missing girl.  Her mother is very concerned.  Concerned enough to hire him.  He is soon over his head; caught in a crime syndicate that includes the beat cops, the local police chief, a psychiatric hospital, an offshore gambling boat, and a pair of bank robbers.

Chandler country in other words. I kept thinking of Neptune, California where the cult T.V. series Veronica Mars took place.  If you liked Veronica Mars you really should check out Raymond Chandler.

While “The Man Who Liked Dogs” is second-rate Chandler, it does have it’s moments.  Three good lines:

I had my mouth open and a blank expression on my face, like a farm boy at a Latin lesson.

When he grinned he opened his mouth wide, and he had a mouth a dentist could have got both hands in, up to the elbows.

Dr. Sharp’s little face was as white as dough.  Perspiration twinkled in his cute little mustache.

I like a detective who can make men with cut little mustaches sweat.  And I liked “The Man who Liked Dogs.” 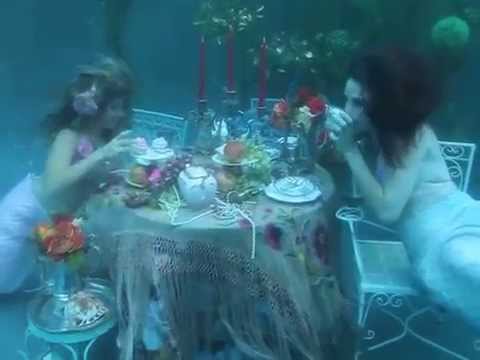 Do not sail your ship into mermaid infested waters.  Not in a Samantha Henderson story.  Ms. Henderson re-imagines the classic Victorian heroine in her short stories and comes up with tales that are as affecting as they are scary.  Perfect reading or perfect listening for an October evening.

In “The Mermaid’s Tea Party” 12-year-old Cassandra is the lone survivor of a shipwreck, both her mother and her governess drown in the wreckage.  Cassandra finds herself alone on an island surrounded by mermaids.   Not mermaids like Ariel, mermaids who tear ships to pieces and then consume those inside.

When the story opens, Cassandra is on the beach with the mermaids who have become bored toying with  her and are threatening to leave her to die in favor of a school of tasty herring.  Cassandra convinces them to bring her food with the promise of a tea party.  The mermaids have found a tea set in the wreckage and are intrigued with the idea of drinking real tea at a real tea party.

They take her to a larger island where a pirate, marooned in an earlier wreck has managed to survive.  The two form an alliance against the mermaids who imprison them, who wrecked their ships in the first place.  As long as Cassandra can entertain them with the promise of additional more complicated tea parties, the pirate can complete the repairs on the boat he hopes will take them to safety, if they can escape what he calls the “fishy bitches.”

In “Five Ways Jane Austen Never Died” Ms. Henderson creates five vignettes that run from kick-ass to tragic as she re-creates Jane Austen’s final days in ways that entertain and move the reader/listener.  Oddly, each one seems at least a little plausible, even the one with vampires and the one with time travel.  I was ready to hate this story, but ended up touched by it.

What made Ms. Henderson’s stories fun for me was the way she took stereotypical characters, the little Victorian girl, Jane Austen, the pirate, and put them through their paces, through a series of events that forced them to become people they never thought they could be.  Sometimes tougher and more willing to become violent, sometimes gentler and willing to sacrifice for others.

And did I mention that Ms. Henderson’s stories are lots of fun.

I listened to both of these on my favorite podcast, Podcastle.

To listen to “The Mermaid’s Tea Party” go here.

I first ran these reviews on my old blog, Ready When You Are, C.B. back in late 2011.  Rerunning them here today makes me want to revisit Samantha Henderson.  Fortunately, Podcastle tends to keep everything archived so you (and I) can go back and give Ms. Henderson another listen.  If you’re a fantasy reader, by the way, you really should check out Podcastle.  In fact, if you just like a good story period, give Podcastle a go.