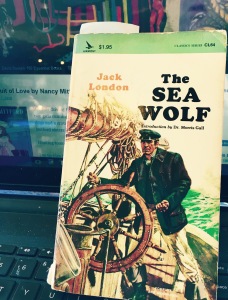 Jack London State Park, in nearby Glen Ellan, CA,  has been holding quarterly book discussion groups this year, hosted by professors Dr. Susan Nuernberg and Dr. Iris Jamahl Dunkle  who are working on a book about Charmain Kittredge London’s creative life. We missed The Call of the Wild, held earlier this year, but made it to yesterday’s discussion of The Sea Wolf, a largely forgotten classic that really deserves a much wider readership.

For those of you who don’t know the book, the novel follows Humphrey Van Weyden, a 35-year-0ld gentleman who lives in Marin Co., California where he writes critical reviews for various magazines and lives off of money a previous generation earned.  While crossing the San Francisco Bay, the ferry he is riding crashes and sinks in the fog.  Humphrey is “rescued” by Wolf Larson, captain of The Ghost one of the last remaining wood and sail ships working in the seal hunting fields of the north-western Pacific.  Capt. Larson is unwilling to make an emergency stop so Humphrey is forced to join the crew where he eventually works his way up to first-mate. 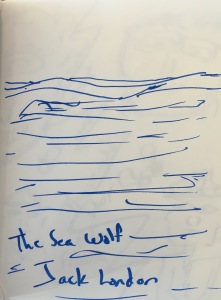 The real interest in The Sea Wolf is captain Larson.  Larson stands in as Jack London’s critique of Nietzsche’s Superman ideal.  Larson knows no moral code except what he can get away with and what he can force his crew to submit to.  He is monstrous in the way he treats others, using them as long as they are useful then discarding them, even throwing them into the sea if necessary.  He intends to make it on his own, without the help of anyone and has no respect for  anyone who cannot do the same.

However, he is extremely well-read, as well-read as Van Weyden the published critic.  So he keeps Van Weyden close, not just to see how far he can push this college educated man, but to enjoy the more rarefied conversation Van Weyden can provide.  They have, after all is said and done, read the same books, something I could certainly understand.

The Sea Wolf works as an entertaining adventure story.  Modern readers may find a few events a bit hard to swallow, but you’ll look far and wide to come up with a better account of life at sea in a sailing ship.  Much of the writing is wonderful.  This is the second time I’ve read The Sea Wolf so I was prepared for long conversations about philosophy between Larson and Van Weyden, but while they were there, they were much fewer and much shorter than I remembered.  This reading I found The Sea Wolf to be about character and 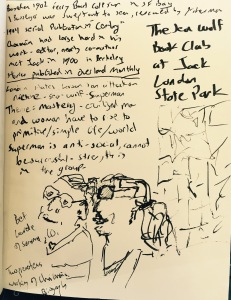 adventure, the struggle between a civilized man and a wild man.  I read it as Buck vs. Spitz in human form.

Yesterday’s discussion group was excellent.  A more-than-slightly nerdy good time for everyone.  I came away from it with a much deeper understanding and appreciation for The Sea Wolf in particular and for Jack London in general.

Some things I learned:

The ferry-boat accident that opens the novel was based on a real event, a crash that occurred in 1902 in which one passenger was swept out to sea where he was rescued by fishermen.  The novel was originally published in serial form in The Century magazine.  Jack London replaced many of the  expurgated sections for the first print edition working in tandem with his soon-to-be second wife Charmain Kittredge.  The two of them would work side by side for the rest of London’s life.  Across from each other actually, as they sat at facing desks while they worked.  London was travelling overseas during the last few months of the books editing process so he gave Charmian free rein to do what she thought was best with the final changes and edits made to The Sea Wolf.

London saw the book’s theme as “mastery” as it describes how the superman cannot be successful over the more civilized man because the greater strength lies in the group. The superman is anti-social by nature so he cannot be successful when confronted with nature. This is the real experience of the American West asJack London well knew.  We may

believe in the myth of the strong man standing up alone against the odds but the American West was settled by communities be they groups of families or groups of miners.  No one made it on their own.

London structured The Sea Wolf’s plot as an ‘X’ with Larson starting on top then descending while Van Weyden starts at the bottom and ascends to the top.  One losing mastery as the other gains it. The two meet as more-or-less equals when Maude Brewster arrives.  The character of Maude is probably the weakest part of The Sea Wolf.  Accepting her was a challenge for just about everyone in the discussion group.  She is also ‘rescued’ by Larson from a sinking ship.  She is a literary critic like Van Weyden and an adventurer like Larson.  And to be honest, in what I’ve read of him to date, London does not do women very well.

But, she may be London’s nod to Charmian, which is kind of fun.  After they married, Charmian would join London on nearly all of his adventures which the two of them worked to make him as famous for his travels as he was for his writing.  Which may have worked against him in the end.  Most Americans now know Jack London first as a great autobiography, a life very well lived, not as a writer.

I honestly expected The Sea Wolf to be an entertaining diversion, I think C.J. who joined me for the discussion group still sees it this way.  However, I found much more in the novel– maybe not a great book, but a nearly great book– even before attending yesterday’s discussion group.  Now, I am definitely putting The Sea Wolf on my read-it-again shelf.  There’s much more going on aboard The Ghost than first meets the eye.

3 thoughts on “The Sea Wolf by Jack London”