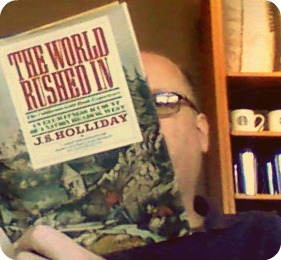 Truth be told, once William Swain arrived in California, his letters became a bit dull.  The journey across the plains and over the mountains offered a wide variety of hardships, enough to fill his stories for the rest of his life, (His wife would refer to him as “My 49’er” when he died decades later)  but the mining camps featured day after day of digging, digging all day long.  Tiresome, monotonous work that did not pay off for William Swain nor for most of the men who worked the early mining camps.

William Swain went home with just 750 dollars to show for two years of labor.  Many men did not do half as well.

I’ve been slowly working my way through J.S. Holiday’s The World Rushed In, an account of the California Gold Rush told through the letters exchanged between William Swain, a New York farmer and his wife and brother who both stayed back home.

Since Swain spent most of his time in California digging, Mr. Holiday relies more heavily on the journals and letters of other writers than usual in these chapters.   Life in California was as unusual as it was along the trail.  Swain points out that there was next to no theft in the mining camps.  Everyone left their tools and other belongings in the open, even if they were going to be away for several days.  Because the penalty for theft was swift execution, as it was for most things, and because of a general sense of honor among miners for lack of a better term, the camps were safe places, for the miners at least.

Things were not so good for the Native Americans. In one of his letters home Swain talks about the California Natives he meets.  He calls them simple, timid and imbecile.  Swain admits that sometimes the miners are guilty of horrific acts against them and calls out the miners from Oregon for special condemnation as men who would rather “kill an Indian than a deer.”

Women fare rather well in California.  Though very few made the journey in the early days, less than eight percent of the 1850 census were women, those who came could make 30 to 50 dollars a day cooking or doing laundry.  One gambling hall in Marysville had three women dealing Monte.  Some went home with several thousand dollars in gold dust as a result.  Prostitution paid even better, of course, with some women making over 10,000 dollars dressing in men’s clothes to ride horseback from camp to camp.  “One celebrated character of this kind said she had made 50,000 dollars.”  Multiply those figures by 22 to adjust for inflation since 1850 and you can see how much they made in today’s dollars.

African Americans are buried in the footnotes in The World Rushed In.  I was struck by George Swain’s comments on slavery in his letters.  Writing from New York, he was William’s main source of news from back home where slavery was already ripping the country apart.  The question of the day was should California be admitted as a slave or a free state.  California basically declared itself a state but still needed the official stamp from Congress.  Very few of the 49’ers were pro-slavery so there was never really any question other than how long southern senators could drag things out.  Six southern states met that year to discuss succeeding from the union, almost ten years before Lincoln ran for President.  The footnotes tell us that there were some slaves working alongside their owners in the mining camps who had been promised their freedom and that their wives and children were being kept back home as “a pledge of good faith.” Ta-Nehisi Coates, when he used to blog for The Atlantic, wrote many posts under the banner “Slavery: a Love Story” where he detailed example after example of how far slaves went to keep their families together.  In this case all the way to California.

There were many interesting tidbits about California to be gleaned from these chapters.  Rents in San Francisco in 1850, for example, were sometimes so high that they equal what you’ll pay there today. Records show that just about anything you could ship to San Francisco would sell at a very high price if it arrived at just the right time.  One ship arrived from Mexico with a cargo of cats which sold at 8.00 to 12.00 dollars a piece since the city was over-run with mice and rats at the time.  So much shipping went on between San Francisco and the Eastern Seaboard that Panama was essentially annexed as the first colony of the United States.  People from all over the world came to California and while many left every year, the influx of new arrivals always exceeded the number of people going home.  By the time of the 1860 census, 39 percent of the states population was foreign born.

William Swain, meantime, went back home after just two years as a 49’er.   He returned to his wife and daughter who’d been a baby when he left, and went to work on the family farm alongside his brother George.   He never made much money as a miner, but did quite well growing peaches, becoming one of the most successful farmers in his county.  He died in 1904 at the age of 87.