But what the reader walks away from Treasure Island remembering is the books characters.  Long John Silver is the best known, but there are plenty of others, pirates and non-pirates alike.  It’s these characters that have kept readers coming back to Treasure Island generation after generation.  They continue to frighten, to intrigue and to entertain.

In fact,  most of what we know about pirates, we learned from Treasure Island.  Pirates have wooden legs and wear  eye patches.  They walk with a crutch, but in a pinch, they can transform their crutch into a deadly spear.  They keep parrots as pets and teach them to say “pieces of eight.”  When they get together, they can’t help but sing “Sixteen men on a dead man’s chest/ Yo, ho, ho, and a bottle of rum!”  They are charmers, but they cannot be trusted.  They terrify us, but we can’t help but want to be like them.  And we’re always a little bit relieved when they get away in the end. 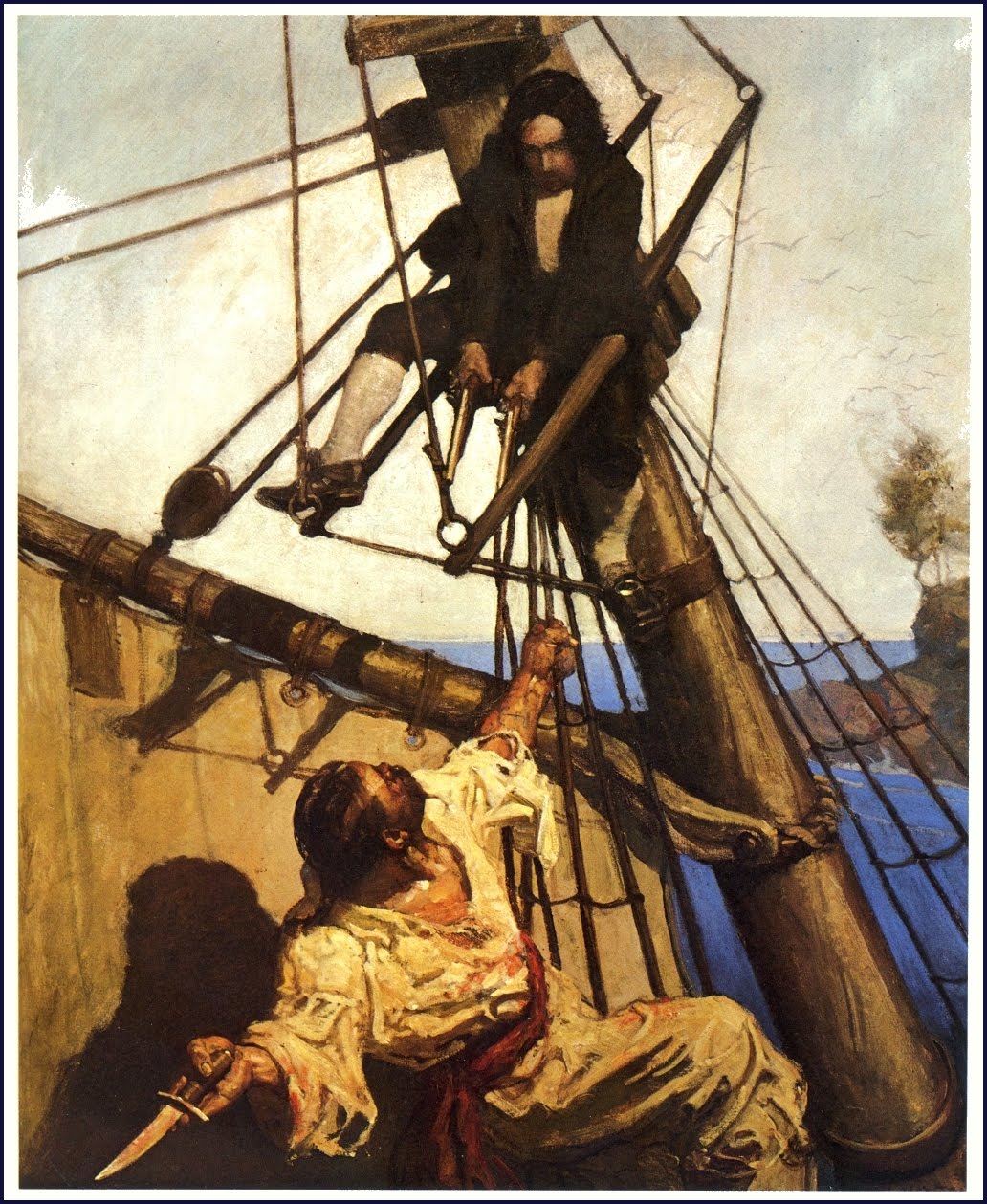 The menace and magic of Robert Lewis Stevenson’s pirates are both captured by N.C. Wyeth’s illustrations.  The elder Wyeth has been admired by illustrators for generations, and many consider his artwork for Treasure Island to be his best.  I don’t know enough about the art of illustration to effectively judge N.C. Wyeth, but C.J. and I have developed a few standards in  almost 15 years of shared museum going.  One is do we believe the figures in the painting existed before the moment of the artwork and will they continue to exist afterwards.  I think Wyeth’s do.  His illustrations capture parts of a larger moment.

N.C. Wyeth is also a master of composition.  Notice this group of three pirates climbing the walls of the fort.  The viewer sees the two on the wall right away, but did you notice the third one who has already entered the fort’s shadow?  And look at the angle of the mast and the yard arm in the illustration above.  There is no steady, level place for Jim to hide in as he climbs the ship’s rigging to escape the pirate.  Everything is sharp angles and  dangerous slanted beams.  The only solid right angle in the picture is the horizon off in the distance.  Beyond that horizon, the safety of home.

This review first ran on my old blog, Ready When You Are, C.B, back in 2010.  Since starting this new site, I have been slowly migrating all of my old reviews. I still have just over 150 to go.