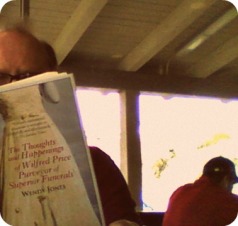 I thought this was going to be a romance.

I picked it from my TBR shelves so I could check off the “romance” square on my book bingo card.  (I’m playing book bingo with my 7th graders this semester.  I’ve read 12 books but have yet to score a bingo.)  I don’t usually read books you could classify as “romance” so this was a tough one. I’ve lots and lots of detective books in my TBR shelves but very few titles that could qualify as “romance.”

Look at this cover–a young woman in an old-fashioned yellow dress. Does that not suggest romance?

It certainly starts off in a romantic way.

Wilfred Price sees his neighbor, Grace at a picnic.  He is immediately taken by the sight of her in her yellow dress:

While Grace is serving Wilfred trifle with cream, he can’t but help notice the slightly too low neckline. He wants to glance at it, but knows women always notice such glances and always resent them.  She laughs, she brushes her hair from her face, smiles.  Wilfred can’t control himself.

He asks her to marry him.

That’s page one and two.

Then the story starts to turn dark, very dark.

I should have suspected it would–look again at the title.

Wilfred is not a romantic figure.  He is in the funeral business in turn of the last century small town England.  A rising figure in society, he has been looking to marry because he is at the point in his career where a wife is necessary.  She can improve his life by providing opportunities to expand his business and his social standing.  He expects Grace will be perfect for the wallpaper shop he hopes to open as an adjunct to his funeral services.

Grace, meanwhile, has her own reasons for agreeing to marry Wilfred so quickly, which we won’t discover until much further into the story.  I should have suspected since she does agree to his proposal immediately in spite of how casually it was made.

While ultimately lacking in romance, The Thoughts and Happenings of Wilfred Price Purveyor of Superior Funerals has much to say about the position of women and men.  The limitations placed on both by society, arbitrary and often cruel, bring terrible change to both Wilfred who ultimately succeeds in small town England and to Grace who must escape it.

By the end I came to like Wilfred, to admire Grace, and to enjoy Wendy Jones’ novel.