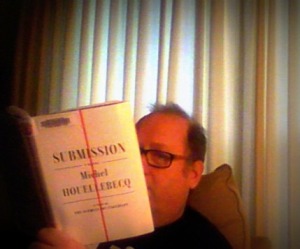 I’m not sure Submission is good enough to be so controversial.

I don’t know enough about French politics in general to be someone’s whose opinion should be trusted here, but I found Submission to be both unbelievable and a bit dull.  People more familiar with the rise of Islam in France and its impact on the political situation there would be more qualified to judge just how plausible Mr. Houellebecq’s book is.  They’ll probably enjoy it more than I did, too.

Submission opens with the story of how the Muslim Brotherhood wins a surprise victory in the national elections.  While the changes they bring about are not that dramatic at first, they do begin immediately with the firing of all non-Muslim faculty at the Sorbonne where the narrator is a professor of Medieval literature.  France’s Jewish population emigrates, restaurants begin featuring halal menus, clothing stores carry more modest clothing or shut down altogether and men begin dreaming of having multiple wives.  There’s a lot about polygamy in Submission.   By the end I was beginning to feel like I was reading a prequel to Margaret Atwood’s The Handmaid’s Tale, albeit one written by a lesser writer than Margaret Atwood.

But now I see that Submission is really a re-telling of Eugene Ionesco’s wonderful absurdist play Rhinoceros.  Briefly, Rhinoceros is about a Paris intellectual who tries to resist the tide when everyone in France begins turning into rhinoceroses.  He fights against the trend as long as he can, has several discussions with friends and colleagues who all tell him how great things will be once they have become pachyderms, only to surrender in the play’s final scene when he becomes a rhinoceros himself and the stage goes black.

Ionesco’s play can be staged as an anti-fascist work but it’s really not a political play.  The most recent production C.J. and I saw, which was from France and in French by the way, focused on how hard it is to resist the pressure to join the crowd even when the crowd is not pressuring you to join.  Everyone who became a rhinoceros was happy as one, but no one was pushing an agenda, no one cared if you became a rhino or not.  The characters were all free to remain human if they wanted to.  But once all your friends, all your family, all your colleagues have joined the crowd and become rhinoceroses, just how could you hold out?

Something very similar happens in Submission.  The narrator does lose his job since he is not a Muslim, but he is given a very generous full pension so he no longer has any need to work.  He can remain a Paris intellectual; he can continue working on his book. The Muslim Brotherhood doesn’t pass any laws that restrict his life at all, he’s free to come and go as he pleases, to live his life like he always has.   Everyone even continues to drink like they always have which surprised me, frankly.  I was sure the Muslim Brotherhood would ban alcohol.  While the narrator faces no negative pressure to convert to Islam, just like no one is under any punative pressure to become a rhinoceros, the new head of the Sorbonne, and old friend, offers him his old job back at four times the salary.  It seems the Saudis are anxious to make the Sorbonne their own, so they are generously funding it.  When the narrator’s potential new boss explains that all he has to do is convert and he’ll have his job back; he’ll even be able to support two or three wives which they can find for him if he likes.  (Apparently, once the Muslim Brotherhood rules France, well-to-do men like college professors will be able to have multiple 15-year-old wives.  This will be news to most of the Muslims I know.)

So Islam conquers France through a well timed political strategy, Saudi money and the promise of multiple child-brides.

I was not impressed.

I don’t see what all the fuss was about.

I thought Submission was pretty silly.

Ionesco, on the other hand, is genius!

2 thoughts on “Submission by Michel Houellebecq”