I have been obsessed with Wikipedia lately. Jennie over at Biblio File recently complained that the author of a book she was reading listed Wikipedia as his main source of information.  This should not be allowed in a nonfiction book, says Jennie, certainly not in one nominated for a prestigious award.  I teach middle school English and history, which involves a significant amount of research, which these days means significant use of online sources including Wikipedia.  Jennie is far from the only person who argues that Wikipedia should not be used for serious research based on the assumption that because anyone can write or edit an article, the articles on Wikipedia cannot be trusted.

I disagree, but who am I to say?  Who are you to say, for that matter?  Why should we assume that because Wikipedia articles are the product of a collective effort they are therefore untrustworthy?

I did find that Wikipedia contains all sorts of articles you won’t find elsewhere. Mr. Lih points out several fascinating examples.  Do you want to know why there is a year 1 B.C.E. and a year 1 C.E. but not a year zero?  Need an explanation of the Buttered Cat Paradox, The Five-Second Rule or the Chewbacca Defense?  You won’t find these topics in maintream encyclopedias, but you will find thorough, interesting articles on them at Wikipedia. 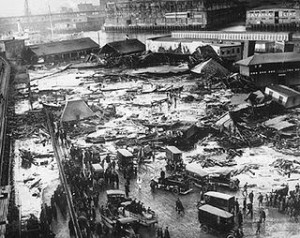 You’ll also find a fascinating article about the Boston Molasses Disaster, which I’m betting you never heard of.  In 1919, a large molasses storage tank burst, sending a wave of molasses between 8 and 15 feet high rushing down the streets of Boston’s North End at a speed of 35 mph.  21 people were killed and over 150 were injured.   Can you find that in the Encyclopedia Britannica or in the World Book?  I could not.

The breadth of articles on Wikipedia is matched by the range of languages it comes in.  Encyclopedias are an arduous undertaking.  The difficulties and costs associated with their production limits their profitability to a few major languages.  Many people around the world speak a language with no encyclopedia, or did until Wikipedia came along.  Now speakers of Waloon have over 9,800 articles in Waloon available to them.  Speakers of Corsican have over 5,600, Pangasinan 3,000, Wu 2,600.  If you feel the need to do your research the old fashioned way, in Latin, Wikipedia has over 15,000 articles in the language of the ancient Romans.

As of today there are well over three million articles in English on Wikipedia.

As far as Wikipedia’s accuracy goes, Mr. Lih’s book does not offer a definitive answer.  He does discuss the study commissioned by Nature Magazine which compared 42 scientific articles on Wikipedia with those in the Encyclopedia Britannica and found both to be about equally accurate.  They found just over three errors per article on Wikipedia and just over two errors per article in the Encyclopedia Britannica.  A second study Mr. Lih cites found Wikipedia to be about 80 percent accurate while Encyclopedia Britannica was 96% accurate.  Mr. Lih does discuss several well known cases of sabotage, deliberate attempts to spread misinformation, on Wikipedia and  a few long running controversies, such as whether or not Gdansk, Poland should be called Gdansk or Danzig which was it’s name when it was part of Germany.   Much of Mr. Lih’s book is like this, concerned with things that will fascinate some and leave many others cold.

In the end, I cannot say that I have a satisfactory answer to the question of Wikipedia’s reliability.  I’ll offer up the reply everyone at Wikipedia reflexively gives whenever anyone points out an inaccuracy on it. “Why don’t you fix it?”

To test just how difficult this is, I decided to add some information to the post about one of my favorite authors Patrick Ryan.   I was sure that I would be the first one to post information about Mr. Ryan and that this would get Ready When You Are, C.B. all kinds of traffic.  As it turns out, there was already a post about Partick Ryan, and Ready When You Are, C.B. was listed in the footnotes.  I did add some information to the article taken from the interview I did with Mr. Ryan last year.  While it is fairly easy to add text to a Wikipedia article I found that some knowledge of HTML is helpful when it comes to adding footnotes.  Wikipedia’s interface is not as easy to use as sites like Blogger.  This is something they should probably work on.  I did find a very good article about Wikipedia’s factual reliability on Wikipedia itself.

So where does this leave me as far as using Wikipedia with my 6th and 7th grade students goes?  I alternate teacher assigned topics with student selected ones throughout the year.  For our last major project I let the students select their own research topics.  They included:

You can probably see already that Wikipedia came in very handy, but it was not the only website they used.  (You can see some of the projects my students produced at TeacherTube.  Please rate them highly.)   For next year, I’m planning on doing a mini-unit about Wikipedia itself, how to use the information there, how to use the bibliography and footnotes as a source for more information and how to evaluate the information in the articles to determine if it’s reliable enough to cite in your own research.

Full Disclosure:  the picture of the Boston Molasses Disaster came from Wikipedia.  I could not get into the Encyclopedia Britanicca online because I’m too cheap to pay for it.  Say what you will about Wikipedia; it is free.  Waloon is spoken in Belgium, Corsican is the native language spoken on the Island of Corsica, Pangasinan is one of the twelve major languages spoken in the Philippines and Wu is a form of Chinese.  While I cannot read Latin, I think it’s wonderful that people are writing articles in it on Wikipedia.  That’s one way to keep the kids off the streets.

This article first ran on my old blog, Ready When You Are, C.B., back in 2010 so some of the links, possibly all of them, may be broken at this point.  I confess that I never did develop a mini-unit on Wikipedia for use with my students.  They continue to use it as a source as do I.  At this point, the major issue I have with Wikipedia is that the articles there have too much information.  They are so long, and so thorough, that they have become very difficult for most 7th graders to use when doing research.  But Wikipedia remains my go-to source for information.  It’s still the best thing out there if you want information.  As far as its accuracy goes, I’m unaware of any major studies on this topic since 2010.  I really wish someone would do one, because it’s a question I’d like to know more about.fictio

7 thoughts on “The Wikipedia Revolution: How a Bunch of Nobodies Created The Worlds Greatest Encyclopedia by Andrew Lih”