The Dare officially starts at 12:00 midnight on January 1 and runs through April 1, 2016.  All you have to do is read books you’ve been wanting to read for years now, all those wonderful books in your TBR stack. If you’re like me, and you wouldn’t be reading this if you weren’t a little like me, you have a large stack of books that you’ve been looking at for years but haven’t read yet.

The TBR Triple Dog Dare is your big chance.

Complete rules, for what they’re worth, can be seen on the TBR Dare page here.   You can sign-up there or just do so here by standing up to the world and declaring you are brave enough to take the TBR Triple Dog Dare in a comment.  You don’t have to actually stand up, you can leave a comment in whatever posture you’re usually in when you blog.

We’ve got just over 30 people from two continents taking the Dare so far, but we’re aiming for 50 and one more continent, maybe two.

So join in the fun, read the books you’ve always wanted to read.  Take The TBR Triple Dog Dare.

I’m happy to be looking at two weeks off of work.  I did bring home one stack of journals to read through, and I plan on doing some clean-up in my classroom later today, and there is another stack of projects I need to read waiting for me there, but still……two weeks off of work is nice.

C.J. and I are planning a trip to Point Reyes Station this afternoon if it’s not raining too hard.  We used to visit regularly when we lived in Marin but we’ve not been in a few years now.  There used to be a very good book store out there; I’m hoping it’s still around.  They have several good art galleries there, more than a few trendy restaurants and a couple of other little shops in an idyllic setting.  The Marin countryside really is beautiful.  Marin gets more rain than any other part of the Bay Area so it’s usually green.

We’re looking for a restaurant to take the in-laws to this year.  We decided that would be our Christmas gift–Sunday lunch out in Point Reyes Station.

I know many of my readers here are teachers in one way or another, so maybe you can give some advice at friending former students on Facebook.

I don’t get a lot of friend requests for students and former students but I do get them now and then.  It’s been one of the big surprises of being on Facebook for me.  I never even considered the possibility that former middle school students would want to Friend me now that they are adults.

I’m aware that Facebook is a public space so I don’t post as freely there as someone who isn’t a middle school teacher might, but I do post family pictures, travel photos, acerbic asides I sometimes make in meetings, jokes I play on my students, comments they make, and the rare photo of a wine flight or a beer flight.

Up to now, I’ve had a blanket policy of not friending students former or current.    Yesterday,  I got a request from a former students who is not in his early twenties.  I saw that we have two mutual friends who were also his teachers, one of them while in seventh grade when he was in my class.

What do you think?  Should I change my policy?  I’m considering accepting friend requests from former students who are now at least 20.  I’ve no intention of friending current middle schoolers or high schoolers.  Or should I stick to my current policy?

I missed them both.  Oh, well.   I think I was reading a book during the Republican debates and C.J. and I were at the circus last night while the Democrats had their debate.

I’m not quite the political junkie I used to be.

I enjoyed the circus, but C.J. really wanted to leave at intermission.  It was an alternative sort of one-ring circus set in a post apocalyptic future.

Our House is Now Cat Free….. 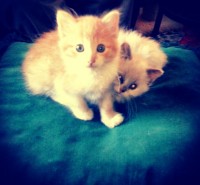 The kittens both found new homes last weekend, so we’re now back to just the two dogs: Gabby and Clovis.  I have to say it’s been really nice.  The dogs now get all of our pet attention and they are clearly happy about it.  We’re hoping to get in a few trips to Point Isabelle Dog Park in Richmond during my break.  Clovis really needs quite a bit of leash training.  He was very good with the kittens but he’s not so great on a leash.

What Are You Reading….

I’m posting my review of E. M. Forster’s A Passage to India tomorrow.  I read it for my book group, my third read of it.  I did enjoy it, but that may be it for Forster for me.

I didn’t really care for the ending.

I hope to do a lot of reading over the next two weeks.  I should be honest, I hope to not waste quite so much time watching Hulu.  Unfortunately, I discovered Deutchland 83, a German series about East German spies, yesterday.  So there may be some binge-watching in my future.

I’ve brought home a couple of kids books.  I’ve made a resolution to get back into YA reading this year, two books a month, maybe three.  I really was a better reading teacher back when I was following YA lit.  Not really sure why I stopped reading it so much to be honest.  I can knock out an average YA book in two hours and the skipping chapters reading method is always an option.

I don’t have to like a book to know that it’s a book my students will like.

I’ve decided to do Book Bingo in the spring semester.  I’ve already set up a Book Bingo card for my students which the school librarian is reviewing to make sure we have enough books for each square.  I’m also working on a how many books will you read in a year if you read 20 minutes every school night lesson.  There’s been this chart going around Facebook that looks impressive but really overstates things if you check the math.

Staples has this fun little site where you can figure out how many words you read in a minute.  Multiply that by 20 minutes a night.  Multiply that by 186 school days.  Divide that by 45,000 (The average number of words in a middle grade YA book) and most kids will need to use the calculators on their phones because that’s too much math for them to do in their heads these-days.

Staples says I read 400 words per minute, by the way.  I was quite pleased.

So this week, I have Mirand July’s book The First Bad Man to finish.  I also started A Brief History of Seven Killings and Fates and Furies.  And I just got two more from the public library.  I’m thinking a book a day….

For some reason I always go on a library binge in the weeks leading up to the TBR Dare.
You really should sign-up for the TBR Triple Dog Dare, you know.

16 thoughts on “Sunday Salon: James and Dakota’s Book of TBR Dares and Other Rambles”