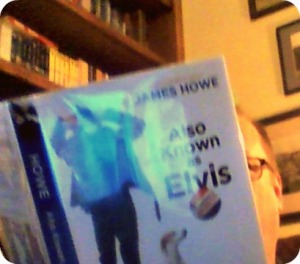 Skeezie finally gets his own book.

James Howe’s The Misfits featured four friends in middle school.  While the four are all social outcasts for various reasons, I always felt that Skeezie was kind of an outcast even within the group because he’s just so darn normal.

True, he always wears the same black leather jacket and is known for slicking back his hair, but other than that, face it even with that, he’s the most regular kid in the group.  I always felt that the main reason he was such a social outcast was because he chose to hang around with three social outcasts.  I admired him for this.

And I always wanted him to get his own book the way Bobby, Joe and Addie did.  Scroll down to see my reviews of their books.

In Also Known as Elvis we get to hear from Skeezie Tookis at last.  Though we don’t get nearly enough of the Gang of Five, all four friends together, to make me really happy, I enjoyed Skeezie’s story of the summer that changed his life, the summer between seventh and eighth grade when his friends all went away on various vacations and he got a job waiting tables at The Candy Kitchen working with HelloMyNamesIsSteffi who will one day become his wife.

Also Known as Elvis is a mix of emotion and humor, much like the other three books in the series are.  Skeezie tells us about his family, his job, the father who left them years before, how he deals with the school bully, and how much he loves his friends.  Rather, he tells his unborn son.  The framing chapters are set in the future, after Skeezie has married HelloMyNameIsSteffi and the two are about to have their first child.  He wants to make sure his new son, who will be called Elvis, gets to know the story of how it all came to be.

I was struck by two things reading this book.  One is that of the four children featured in the series only one still lives with both her mother and her father.  That’s a common issue in Young Adult and children’s literature, the abundance of broken and single parent families so nothing new and I have nothing new to say about it here.  The second thing was how good the chapter titles in Also Known as Elvis are.  Here’s two:

When Your Dad Leaves, Part of Your Mom Leaves, Too.

Nails Sticking Out of the Walls Where My Dad Use to Be.

Those are heart breakers; lines that tell enough of a story to be a novel.  But don’t fear. While there may be cause for tears in each of The Misfits books, these are stories with happy endings.

Which, in my experience, is just the kind of endings kids like.