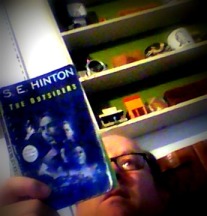 I’ve read S.E.  Hinton’s novel The Outsiders somewhere between 25 and 30 times over the last 13 years.  It’s long been a staple of the 7th grade reading program, sometimes beloved by all, sometimes just really, really well liked.

This year one class loved it, one almost loved it and one really liked it.

You can find standard reviews of it here and on my old blog Ready When You Are, C.B. if you’re interested.  This time around I thought I’d just offer a few observations knowing full well that these observations all come from reading the book far too many times.

First off, S.E. Hinton really tried to show her literary chops when she wrote the book.  Someone told me that she didn’t do all that well in her English classes, so I suspect she may be showing off here.  Ponyboy is quite the reader: Great Expectations, Call of the Wild, Robert Frost and Gone With The Wind are all specifically mentioned.

But beyond this, there are a couple of hints that could be deliberate.  One, just after killing Bob, Johnny says, “There sure is a lot of blood in people.”  Maybe just something he says, maybe S.E. Hinton referencing Macbeth, “Who would have thought the old man had so much blood in him.”

Later, when Ponyboy finally returns home after days spent hiding out with Johnny one of the reporters interviewing him asks, “What would you do right now if you could do anything you wanted?”   Ponyboy replies, “Take a bath.”  The reporters all laugh.

This one, I admit is really a stretch, but when David Copperfield first arrives at Betsy Trotwood’s home, after running away just as Pony and Johnny did, Miss Trotwood asks her good friend what they should do with the boy.  His reply, “Give him a bath.”

So, is the author showing off here?  I’m probably over-reading the book, but I have read it at least 25 times, so maybe I can be excuse.

The second, and I think much more valid think I noticed this time around, is how S.E. Hinton links individual Socs with individual Greasers.  I can argue that she is looking at how the same character would have developed given differing circumstances.  That Ponyboy and Cherry Valance are two sides of the same coin is obvious after the second or third time you’ve read the book.  They are kindred spirits, they even like the same type of guys.

Bob and Johnny are also linked.   When Ponyboy meets with Randy just before the rumble, he explains how Bob’s parents never really saw him, which is precisely the problem Johnny has with his parents.  The neglect each faced isn’t the same, but what makes it different is really the result of their social standing.

Randy is also linked, in my opinion to Dally Winston.  Randy is Bob’s best buddy, so broken emotionally by Bob’s death that he cannot continue being a Soc.  He leaves town rather than participate in the rumble.  Dally is Johnny’s best buddy, really his brother.  Dally is so broken by Johnny’s death that he commits suicide by forcing the police to kill him.  He famously wants to win the rumble for Johnny.

Pony’s older brother Darry was almost a Soc himself.  At the rumble we meet his former best friend Paul Holden.  The two were once captain and co-captain of the high school football team.  Both are at the rumble reluctantly, both agree to fight the other.

This mirroring of characters is something I noticed before, but not nearly as much as I did this time around.  I think it could make a decent paper.  If someone is looking for a thesis idea, please feel free.

Meantime, I’ll be reading The Outsiders at least twice again next year.  Who knows what I’ll find.