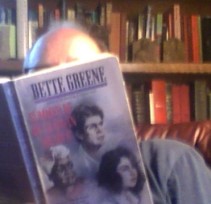 Bette Greene’s Summer of my German Soldier comes highly recommended by two people whose opinions, and friendship, I highly value.  So there was some pressure for me to like it.  There shouldn’t have been, since neither person would have been all that upset with me if I hadn’t liked it, but there was.

It’s a good book.  I did have a few problems with it, but I’m not sure how much I can really hold the book responsible for them.

The story is about Patty Bergen, a teenager living in small town Arkansas during the Second World War.  Hers is the only Jewish family in the town, but they are just barely Jewish.  They don’t practice or attend services and are distanced from their slightly more observant extended family who all live in Tennessee.  One summer, the friendless Patty is attracted to a young German prisoner of war who stops by her father’s store after a work detail to buy supplies.  When she later finds the German prisoner hiding in her family’s barn, she decides to help him rather than turn him in.

This is a bit of a stretch, really.  Polly’s family is difficult. Her father is borderline abusive.  She has no one other than the family maid to really talk to.  The young German soldier, who speaks English, is really the only person who has ever considered Polly worth talking to seriously.  I can see why she’s attracted to him, as can most readers.  But even in rural Arkansas, it’s difficult to believe a Jewish girl wouldn’t know enough about what was going on in Germany to keep her from helping an escaped German prisoner of war.

Add that to my on-going problem with the sheer number of good Germans in fiction.  I’m really beginning to wonder how it is that the Nazis ever got anyone to go to their rallies what with all these German characters who really don’t like them.  And there is the black maid who just can’t help but be totally devoted to the lonely white girl.  When my family lived in the south, in 1973, we had a black maid; she had her own family just as most people do.

But, Summer of my German Soldier was written in 1973, so maybe I should try to overlook these things.  They were not the tired clichés they have become over the years quite yet.

What really saves the book is the character of Polly.  Though even she has been done before, see Carson McCuller’s The Member of the Wedding for example, Bette Greene does her so well that I was willing to let go of  my other issues long enough to enjoy spending time with Patty Bergen.  I was very glad when she finally got up the nerve to tell her father off, too.

I have two students currently reading the book, a first.  Middle schoolers avoid historical fiction, especially historical fiction without supernatural characters, and this cover really is terrible.  What are they looking at?  A parade of seriousness?  I’ll be interested in hearing what they have to say once they are finished.

8 thoughts on “Summer of my German Soldier by Bette Greene”