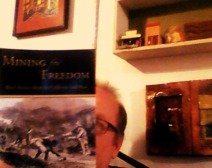 A few months ago an article by Kameron Hurley finally came to my attention via a mention on Podcastle.  “‘We Have Always Fought’: Challenging the ‘Women, Cattle and Slaves’ Narrative” makes the argument that women have always been warriors and that it’s time to start portraying them as such particularly in science fiction and fantasy.  I’m not enough of a historian to say whether or not she is right, but I suspect she probably is.  Her article is well worth reading, though I would have like to have seen more specific evidence. But then that is the comment I write most often when grading student work.

Sylvia Alden Roberts provides lots of evidence in her book Mining for Freedom, though it is evidence for a different proposal.  Her argument is that African Americans were as much a part of the California Gold Rush as anyone else.  While many came to California seeking wealth, many others came seeking freedom.  While their story has largely been left to the margins of the history books, if told at all, it’s a story of struggle, hardship and success.  African Americans got rich in the gold fields, some of them quite rich.

Three things struck me while reading Mining for Freedom.  One is just how successful African Americans were in early California.

Between the 1849 California Convention and the outbreak of the Civil War, sizeable black communities developed in Sacramento, San Francisco, Marysville, and the port town of Stockton.  Defying their own social, economic, and geographic diversities, black men and women united and mounted a determined battle for civil rights.  They established newspapers, schools, churches and businesses, and a communication network that reached nationwide.  They built a strong social and cultural faction that included libraries, theaters, opera houses, and literary associations.  They also proved themselves an aggressive political force, giving benefits and even mortgaging their homes and businesses to raise money for their cause. Between 1855 and 1857, blacks supported three major “colored conventions” and raised large sums of money to lobby for education, voting rights and the right to testify in court.

I knew that all of this existed during the 20th century, but that it was going on as early as the 1850’s was news to me.

The second thing that struck me is so obvious in retrospect that I really should have thought of it before now.  If you look at a map of early gold rush towns, at the point when most of them are really camps more than towns, you’ll find an embarrassing number of towns with racist place names.  “Negro Hill” and “Negro Tent” are two of the less offensive ones.  While I don’t celebrate the nomenclature, thanks to Ms. Robert’s book I can celebrate the African Americans who lived and worked in these early towns.  While their names are evidence of the racism, they are also evidence of the over 5000 African Americans pioneers who lived and worked in the gold fields.

The third, and most interesting aspect, of Ms. Roberts’ books is the large section of case studies she provides.   Mary Elizabeth and William Sugg are two good examples.  Mary Elizabeth was believed to be the daughter of a slave mother and her white owner.  At the age of 12 she crossed the plains with the Snelling family, her owners.  Along the way, they had to hide her from Native Americans who saw her skin color as proof that she was one of their own, kidnapped by whites.  In 1855, she married William Sugg a former slave who was working on the Snelling ranch in Mariposa County.  William had traveled west from North Carolina with his owner who sold him his freedom from one dollar at a time when most slaves had to pay over 1000 dollars to purchase their freedom.

William and Mary Elizabeth settled in Sonora, California.  The two had eleven children.  After many years, William left his family in Sonora and moved to Merced.  Mary Elizabeth converted her home into a boarding house which provided a more than decent living for her children.  The Sugg family occupied the home just a block off of Sonora’s main street, for 125 years.  It’s now listed on the National Registry of Historic Places.

There are many other stories in Mining For Freedom, many of them much more exciting than the story of the Sugg family.  I’ve included their story in tribute to the town of Sonora which is where I found this book in the first place at the town’s excellent local history museum.  If you’re ever in Sonora, but sure the pay it a visit.