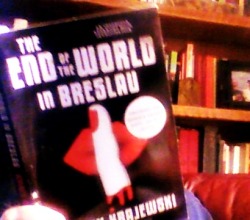 I don’t know why I finished this book.

I’m not someone who reads a book all the way to the end just because I started it.  In fact, I’ve been known to abandon a book fifty pages from the end because once I lose interest, I lose interest.

I guess there was just enough that I enjoyed in Marek Krajewski’s second Inspector Mock book to keep me reading.  Read I did.

The End of the World in Breslau, translated from the Polish byMarek Krajewski, is set in 1927 Germany.  Today the city of Breslau is now Wroclow, Poland.    To say it’s set in Breslau’s underworld is to grossly understate the situation.  The world Inspector Mock inhabits is beneath the underworld.   He’s a Dante, giving the reader a descending tour of hell.

The crime he is investigating involves a serial killer who has been recreating crimes committed centuries earlier in the old town section of Breslau.  Medieval horrors brought back to life to terrify the 20th century into believing that the end of time has arrived.  This would normally be dark enough, but Inspector Mock’s love life takes the reader into dark territory as well.

Mock is in love with a former high-class prostitute who cannot escape her life.  When she runs away, Mock’s investigation is sidetracked to Berlin’s underworld which is every bit as dark as Breslau’s.  Her subplot bugged me.

So here’s what bugged me.  Three things.

One, I just don’t believe in serial killers who commit spectacular, artistic crimes.  Lately, detective fiction has gone off the deep end when it comes to creative serial killers.  It’s entertaining up to a point, but realistic?  I have very strong doubts.  I think most of us who read this stuff can probably come up with the names of half the real serial killers who ever lived off the tops of our heads.  Bundy, Daumer, that weird clown guy, Son of Sam, Zodiac.  One reason why we know so many of them is that there really are not that many of them.  Murder, when it happens, is not artistic.

Third, the casual anti-semitism of the characters.  I believe this was completely realistic.  Most historical fiction, detective or not, set in pre-war Germany is about people who resist anti-semitism.  There’s so much historical fiction against anti-semitism that one could wonder just how the Nazis managed to overcome the majority of people who opposed them.  Truth is, they were elected.  While The End of the World in Breslau is not about this issue, when the subject does come up, the characters are casually anti-semetic. This is completely realistic, I know, but it bugged me.

I wish I could say that I was glad to have kept reading to the end, but I was really just glad it was over.

And I still don’t understand why so many people insist  on finishing every book they start.