A Wrinkle in Time by Madeleine L’Engle was one of my favorite books of all time, back when I was 12. It was one of those books that opened up a new world of reading for me. I read all of the sequels that existed, at the time just two, and everything I could find by Ms. L’Engle at my local and school library. Everything. To this day I recall the chapter about the man with red eyes just about every time I enter a new housing subdivision with its rows of nearly identical houses. I expect every front door to open and one boy and one girl to simultaneously come out of each with a ball and a jump rope and for them all to begin jumping and bouncing in perfect unison, just like they do in chapter 7 of  A Wrinkle in Time, “The Man With Red Eyes. I think it’s one of the creepiest images in all of English literature.

For several years I’ve had a set of five copies in my classroom, an option for my students’ book clubs to select. This month, at long last, one group finally chose it, so I decided to re-read it along with them. Recently, Sam 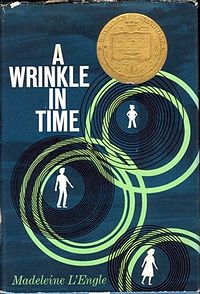 over at Book Chase wondered if he should re-read a book he loved back in college. Turns out he is right to hesitate before going back to revisit a book he loved 20 plus years ago. This is not to say that A Wrinkle in Time is a bad book, not by any means, it’s just not what I remembered.

The story concerns three children, Meg, Charles and Calvin. Meg Wallace,the central character in the book, is the daughter of genius parents. Her father is a renowned government scientist who has been missing for several years. The government will not tell the Wallace family everything, but they do know that he was lost while working on tesseract, a method of bending three dimensional space around a fourth dimension in order to travel extremely long distances between planets. Charles is Meg’s youngest brother, also a genius and Calvin is the new boy next door, too smart to fit in with his large family of very normal siblings. Meg wishes she could fit in, be closer to normal like her twin brothers who show no sign of possessing extraordinary ability or powers the way Charles does.

Enter the three witches: Mrs. Whatsit, Mrs. Which and Mrs. Who. These three elderly ladies have moved into a 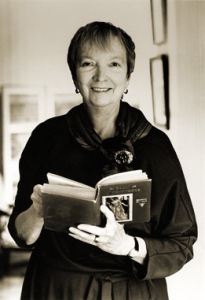 run down house long believed to be haunted. Charles befriends and introduces them to Meg and Calvin. They help the children begin a journey to rescue the lost Mr. Wallace by teaching them how to tesseract. Eventually they learn the true identity of the three witches and Meg learns a lesson about the power of love and that what she saw as her own faults are really her strengths.

But for me, A Wrinkle in Time has always been about the man with red eyes. His planet is a perfect looking American suburb, where all of the children look and act the same, to the point that when every little girl jumps rope, every rope hits the ground at the same time. Any child who deviates from this norm is subjected to retraining that lasts until that child is broken and remolded into one who will cooperate and get along with everyone else by being like everyone else. It has been suggested that Ms. L’Engle was critiquing Soviet style communism here, but it seemed like suburban California to me when I was 12 and lived in an all white town where every fourth house had the same floor plan, and still felt that way when I re-read the book this week. Meg, who sees herself as someone who cannot get along with the culture on her own world, is horrified by what she sees on his planet and by what happens to the one boy who does not fit in with the others.

s out that I had forgotten everything that happened after the man with the red eyes. That was the end of the book as far as I was concerned, but it actually goes on for several more chapters. Chapters that I did not like this time around, unfortunately. The actual ending struck me as so simplistic that it was very hard to believe, and it turned out to be kind of preachy. But, I suspect, in spite of this, that the next time I find myself in a new subdivision, I’ll still have a moment when I wait for all of the doors to open at once and for identical children to come out of each house and begin their play, in unison like they all did 30 years ago when I first read A Wrinkle in Time.

In the years since I first ran this review on my old blog, Ready When You Are, C.B. back in 2009 only a handful of students have read A Wrinkle in Time.  Those who have, all enjoyed it, a few raved about it as their favorite book of all time.  While I still think it holds up well overall, it has become a bit dated, a bit sweet when a harder edge is the current trend in dystopian YA fiction.   I suspect it will become something of a cult book eventually, not so widely read but with a very devoted fan base.   As long as it does survive.  Chapter 7 alone makes preserving A Wrinkle in Time worth the effort.

7 thoughts on ““It was a dark and stormy night.” A Wrinkle in Time by Madeleine L’Engle”