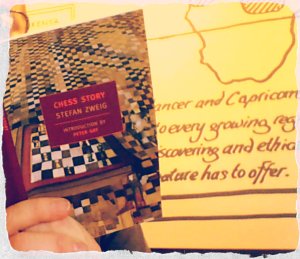 How does this sound for torture?

The Gestapo locks you in a decent hotel room. It’s comfortable. A pretty good bed, a desk, a chair.  Three meals a day, neither too cold nor too hot.  You’re all alone but the Gestapo is leaving you alone. No physical harm comes to you.

But there is nothing to read.  Not a single thing in the room with any text on it, not even the label on a box of toothpaste.

You’re left there, alone, for days.

How long before you’re willing to tell all?

Stefan Zweig’s Chess Story, ttranslated from the German by Joel Rotenberg,  is the tale of one unusual chess match between two very unusual players.  The first is the reigning world champion, a sort of enfant terrible who came from a forgotten corner of backwoods Europe to surprise everyone in the chess world with his prowess and his crude behavior.  Think of him as a chess hustler, a con-artist who uses chess solely as a means to make money as he travels from town to town looking for a match.  He’s somewhere between Paul Newman and Jackie Gleason in The Hustler, probably closer to Gleason’s character.

While on an ocean liner sponging off of anyone bold enough to play against him, the world champion encounters a lawyer with a gift for the game.  How the lawyer became such a gifted player and at what cost is the main subject of Chess Story.

Years before the novel opens, the lawyer was arrested by the Gestapo after they moved into Austria and held for months under the conditions I described in the opening of this review.  Eventually he is willing to tell his captors whatever they want to know, but before they can begin their interrogation he is able to steal a book from a coat hanging in the interrogation room.

I touched the cloth and sure enough felt something rectilinear through it, something that was flexible and rustled slightly–a book!  A book!  And the idea flashed through my mind like a bullet: steal this book! Maybe you’ll succeed, and you can hide it in your cell and then read, read, read, finally read again!

The book turns out to be an account of 45 chess championship games, move by move.  At first the lawyer is disappointed, but with nothing else to read, he begins going  over each game, figuring out each move, at first with bread crumbs on his blanket then in his head.  Then he begins to play games against himself, entirely in his head.  He becomes a master of the game, playing out each move over and over again making it possible for him to defeat almost anyone  he plays against, but the psychological damage done by dividing himself into two opponents is long lasting.

Eventually he gains his freedom but he does not play chess again until years later when he meets the world champion on an ocean liner.

Chess Story is a very slight book, short in length and confined in subject matter.  A handful of characters, limited locations all of which are small rooms.  A chess board–but even that is absent for much of the book as the lawyer plays most of his games inside his own head.

The life of the mind saves the lawyer from succumbing to his Nazi interrogators, but it leaves him damaged beyond repair, so it seems.  The ending is unclear.  Can he ever recover or will he be forever divided into two opponents within the same mind?

This was the author’s last work, unpublished during his lifetime.  He and his wife, who had escaped the war to America and then to Brazil, committed suicide while both were in their early 60’s two years before World War II ended.  Stefan Zweig’s story seems as strange as the one in Chess Story.  I still don’t really know quite what to make of it.

I think I have another Stefan Zweig book in my TBR case.  Maybe after a second novel I’ll have a better idea.

4 thoughts on “How to Torture a True Reader: Chess Story by Stefan Zweig”