The Fourth Crusade and the Sack of Constantinople by Jonathan Phillips tells the story of what went wrong. The crusade began as an attempt to send large numbers of reinforcements to the crusader kingdoms in Palestine to try and recapture Jerusalem but ended up invading several Christian kingdoms culminating in the destruction of Constantinople, the most splendid city in the Christian world of its day. It takes many mistakes and many people for something to go so disastrously wrong, and it is to Mr. Phillips credit that he does such a good job explaining how the Fourth Crusade came about and then came to such a bad end.

The crusade started with an overreaching promise to send 30,000 men to defend the crusader kingdoms and a contract with Venice to build enough ships to carry them. Because England did not participate in this crusade and because several other groups decided to bypass the planned gathering in Venice and go straight to Palestine, not enough forces gathered to cover the contracted cost of building the ships. To pay off the dept, the crusaders agreed to take the coastal city of Zara, which the doge of Venice had long wanted to control. Still not enough money was available to pay the debt for the ships, so the crusaders joined forces with Alexus IV, son of the deposed emperor of Byzantium in an attempt to dethrone Alexus III and take Constantinople. Afterwards, Alexus IV was not able raise enough taxes to pay his debt to the crusaders 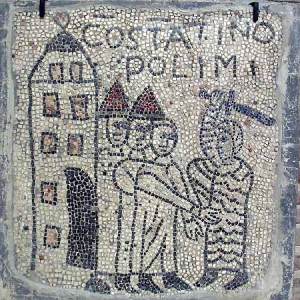 and was dethroned by his own people. In the end, because the political situation in Constantinople was so chaotic the Greeks were not able to adequately defend their city and it fell to the crusaders.

In the end, the venom intended for the Muslim population of the holy land was unleashed on the Christians of Constantinople. Churches and monasteries were raided. Relics were looted. Money and valuable objects were stolen. The silver leaf that decorated the Hagia Sophia was pealed away, chiseled off and melted down. Not even nuns in their convents were safe.

The crusaders then established a kingdom in Constantinople and tried to bring the rest of Byzantium under their control. They never made it to the holy land in the end, nor did their kingdom last very long. Within a century, the Greeks were back in control of Byzantium and Constantinople, though even they fell shortly afterwards to the Turks.

Mr. Phillips explains all of these events using eyewitness accounts from both sides of the story. He gives the reader the details needed to illuminate the events and to understand the motivations of the people involved. It’s hard to find any heroes in the Fourth Crusade, everyone’s motives are so compromised either at the start of the crusade or by its end. That the crusades targeted both Muslim and Jewish populations, most people know. The Fourth Crusade and the Sack of Constantinople is a useful book because it details the extent to which the crusades targeted Christians and did so in the name of God. In the final analysis, there is not much to admire in the notion of a crusade, and we should be on our guard whenever we hear someone call for one.

Fail to learn the lessons of history at your own risk.

This post first ran on my old blog, Ready When You Are, C.B., towards the end of 2008.  I enjoy reading history and still don’t read enough of it.  I hope to do a couple of books for non-fiction November which starts in a  week.