The Sirens of Titan by Kurt Vonnegut, Jr. begs the question of just how will Kurt Vonnegut, Jr. be remembered. In fact, will he be remembered at all? I found the book to be well in step with his early novels. There is a time travelling man and dog who appear regularly appear on Earth wondering about the house where the man’s disgruntled wife spends her days fighting off tourists and religious fanatics who want to see the space man. There is the richest man in the world who loses his fortune and finds himself on a rocket ship bound for Jupiter. There is an alien from Tralfamador, marooned on Titan, one of Jupiter’s moon’s, waiting through the centuries for the replacement part his rocket needs to arrive. And there is the suicidal Martian invasion of Earth that ends in the creation of a new religion, The Church of God the Utterly Indifferent.

It’s all in good fun with a dash or two of metaphysics thrown in. Maybe a splash of social 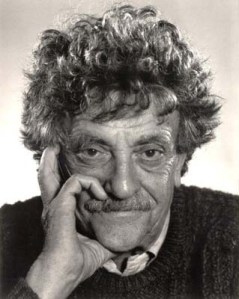 criticism here and there for good measure. I enjoyed it, but I also found it very 60’s. I’ve been reading Kurt Vonnegut, Jr. most of my life, probably for the last 30 years. Now that I’ve finished this one, I think I’ve read all of his published work, so you can count me as a fan. But I wonder if anyone will be reading him two or three generations from now. If they are, I suspect they’ll be reading Slaughterhouse Five. Maybe a few graduate students will still be reading the rest of his novels, but I’m not sure.

It feels natural to wonder about this regarding Kurt Vonnegut, Jr. since so many of his books, The Sirens of Titan included, deal with the issue of time and the notion that all time exists simultaneously. Everything that will happen has already happened. The time travelling man and dog in The Sirens of Titan are like Billy Pilgrim in Slaughterhouse Five, unstuck in time and space. They travel to the future and back, from planet to planet, experiencing it all as happening at once. Billy Pilgrim could choose which parts of his life he could visit. I hope Kurt Vonnegut, Jr. can, too. That seems like a fitting heaven for him, a paradise he might want to visit now and then. Actually, it doesn’t sound that bad to me, either.

I first ran this review back on my old blog, Ready When You Are, C.B. shortly after Kurt Vonnegut, Jr. died.  I think it’s still too soon to say how long his legacy will last, but I stand by my comments above. I think the question of how timely vs. timeless his work is is still a legitimate question.  I’m rooting for him.

2 thoughts on “The Sirens of Titan by Kurt Vonnegut, Jr.”