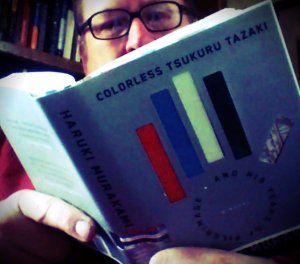 I’m please to say that Haruki is back!  Most of us were less than fully satisfied with Haruki Murakami’s last novel, 1Q84, most of us didn’t even  make it through to the end, so I suspect we were all a little nervous about this new one.

But I’m pleased to say that Colorless Tsukuru Tazaki and His Years of Pilgrimage, translated from the Japanese by Philip Gabriel, delivers the goods.  This time around Murakami provides a character and a story that worked their way into this reader and left me both satisfied and wondering.

Even with no talking cats.

Colorless Tsukuru is a realistic Murkami. That is to say nothing fantastical happens even though what does happen touches the border lines of believability at times.  Murkami’s characters act in ways that might lead some readers to expect magical realism to happen, but events stay firmly rooted in the real world.

Tsukuru Tazaki is the only one of five closely knit high school friends to have a name that does not reference a color.  Each of the other four have a name associated with either red, blue, white or black.  The five friends are inseparable until Tsukuru leaves their home town for Tokyo where he goes to college in the hopes of one day becoming an architect who designs train stations.

One day, Tsukuru receives a call from one of the four informing him that he is never to contact any of them ever again.  They want nothing to do with him.  Shocked, Tsukuru doesn’t even think of asking what happened, what could he have done to make them all reject him.  Over a decade goes by.  Tsukuru graduates and gets a job with a railway company.  He doesn’t design stations so much as remodel and update them, but he is satisfied with his work.  Eventually, a young woman whom he hopes will become a girlfriend convinces him to make contact with the four friends who abandoned him so long ago and find out why the did it.  She says this is what he needs to truly get his life going again.

What he finds out shocked me as much as it shocked Tzukuru.  I won’t discuss it here in case I mange to convince someone to read the book, but I will say that it was a big risk for Murakami, making this particular reason the reason.  I wonder if he lost some readers with this reveal.  He may have, but I don’t think he should have.

While I don’t think there is much new ground covered in Colorless Tsukuru, long time Murakami fans will recognize elements of Norwegian Wood multiple times, Murakami’s book had a mature feel to it this time around.  It’s not as playful as books like Wind-up Bird was, but that’s okay.  It feels more rooted, maybe even stripped down some for a Murakami story.

A railway station, like an airport, is really no where.  They are in towns and cities but they are not really part of them in the sense that so many travellers are just there to change trains or change planes.  I’ve been to the airport in Salt Lake City to change planes several times, but that doesnt’ really count as being in Salt Lake City.  I never left the airport, therefore I was never really there.

One airport is much like another.  To be in one is to be between places.  The station is almost an extension of the train itself.  Meeting someone in a station is just about the same experience as meeting someone on a train.  You might begin a conversation, you might share a drink or a meal, but even if you spent enough time together to share something about your life, you are just passing through.  You’re not forming a lasting bond.

So many of Murakami’s main characters have this same feeling to them. They are not really anywhere even though they may be in a particular place.  They don’t really interact with the world just with the few people they are travelling with.  Since they are travelling, not arriving, many of their relationships have a temporary feel to them.    Tsukuru doesn’t really leave his metaphorical station until the final pages of the book, after he has completed his years a pilgrimage most of which he spent in the same place.

I had one other really good point that I wanted to make, but I’ve forgotten it.  If I stick to my metaphor then I guess it’s a piece of lost luggage, something I left on the train.  Who knows what it might have contained.