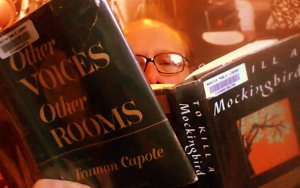 Harper Lee and Truman Capote had what is probably the most famous friendship in American letters.  They grew up together– he appears in To Kill a Mockingbird as Dill Harris, the best friend of Jem and Scout Finch.  (I’ve not read Capote’s book yet so I can’t say if Harper Lee appears in it.)  Ms. Lee famously helped Truman Capote compile the interviews which make up his masterwork In Cold Blood.  He is rumored to have implied To Kill a Mockingbird owes much of its success to his pen.

Someone really should write a joint biography of the two, maybe a biography of their friendship.  Harper Lee is famously reclusive, but she has started to make public appearances so there is some hope she might grant interviews. Not much hope, I’ll grant;  she is either too shy or too classy or enough of both to have kept quiet about her personal life for decades.  But I bet a joint biography would be fascinating and I’m sure it would sell like hotcakes.

So, I’m sitting here in Starbucks as I type this with a copy of Other Voices Other Rooms and To Kill a Mockingbird, both checked out from my library, thinking about reading the two together just to see what I can find.

Let’s start with the opening sentences…..

Other Voices Other Rooms by Truman Capote:

Now a traveler must make his way to Noon City by the best means he can, for there are no buses or trains heading in that direction, though six days a week a ruck from the Chuberry Turpentine Company collects mail and supplies in the next-door town of Paradise Chapel: occasionally a person bound for Noon City can catch a ride with the driver of the truck, Sam Radclif.

Starting with place is an old device. Think Dicken’s in Bleak House with its wonderful description of muddy London, imagined dinosaurs hiding in its fog or Shirley Jackson’s opening description in The Haunting of Hill House.   Capote goes on to describe the lonely, swampy landscape where his novel is set. The proper nouns give the location character.  Is Noon City named after the time of day or a person?  How is a city so devoid of people that  no one ever seems to go there but for delivery men and Sam Radclif.  Does the “now” mean things used to be different or the narrator calling the audience to attention?  This is a good opening but it’s a clear sign that this book will take it’s time. It’s going to be about atmosphere.

To Kill a Mockingbird by Harper Lee:

When he was nearly thirteen, by brother Jem got his arm badly broken at the elbow.

The rest of the first paragraph dismisses the importance of this wound since once it healed Jem could still pass and punt which was all he cared about.  So what if one arm ended up a little shorter than the other.

This is a much more modern opening, the kind we like to have these days.  It grabs the reader’s attention right away, even though it uses the passive voice, introduces two characters one with a magically strange name which also gets our attention.  We’re already feeling something for the as yet unnamed narrator and her brother.  A twelve-year-old boy with a strange name and a broken arm.  This book will be about characters more than atmosphere.

Mr. Capote’s opening is much more old fashioned which puts him at a disadvantage, I think. Most readers today like a go0d, quick attention-grabber to start their reading.  Ms. Lee is already telling us a story.  Mr. Capote is setting the stage before he begins.

But I’m going to have to give this round to Harper Lee.  I think Mr. Capote’s opening is a B+ version of it’s type while Harper Lee’s is a A+ version of hers.  Just how did he break his arm?

This is the fifth reading project I have going this summer– I’m working my way through Kevin Starr’s history of California, Wallace Stegner’s novel Angle of Repose, The Deal Me In Short Story Challenge, and every Inspector Maigret novel Penguin ends up publishing, so it may be a week before I come back with the next installment of Harper Lee vs. Truman Capote.  I’d like to read 50 pages of each book and see what I can find.