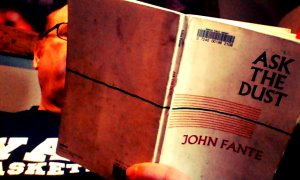 Chances are, you’ve probably never heard of John Fante.  I only stumbled across him because Ask the Dust was included in a box set of novels set in California that I recently lusted after.  Though I couldn’t afford the box set, my library had a copy of Ask the Dust on the shelves.  Lucky for me.

Written in 1939, Ask the Dust is about Arturo Bandini, a would-be writer who lives in a flophouse/hotel in the Bunker Hill section of Los Angeles.  While I didn’t find anything particularly ground-breaking about Arturo Bandini’s story, more about that later, what I found in Ask the Dust is some of the most exciting writing I’ve come across in a long time.  Fante’s writing is not the stuff of MFA programs; he is no refined flower.  It’s not the writing Charles Bukowski attacks in his introduction as “Word-Culture.” Rather his voice is the voice of America’s underclass, a de profundis calling forth from the gutter.  His style is raw, his emotions are worn on his sleeve, but when Ask the Dust is working at it’s best, it’s working at a height few writers achieve.   Chapter six is the best two pages of writing you’ll find.

Ask the Dust’s “here” Arturo Bandini spends his days thinking about writing and writing and visiting Camilla Lopez, the woman who works in a nearby cafeteria.  Bandini loves Camilla but he cannot consummate this love.   He cannot consummate his attraction to any of the women in the novel until he gets past his writer’s block.  Bandini has published one short story, but been unable to write another ever since.  He sends his publisher long letters about his life describing how events and people prevent him from writing.  When his publisher decides to print one of these letters as a short story, Bandini finally breaks his creative block and begins to write feverishly, making the women in his life the subject of his work.

Towards the end of the novel he runs off with Camilla though she has turned out to be even more self-destructive than he is.  This passage, set just after he and Camilla have finally reunited in the apartment she has destroyed is a prime example of why I loved Fante’s writing:

When it was all gone, the dream of floating toward bursting stars, and the flesh returned to hold my blood in its prosaic channels, when the room returned, the dirty sordid room, the vacant meaningless ceiling, the weary wasted world, I felt nothing but the old sense of guilt, the sense of crime and violation, the sin of destruction. I sat beside her as she lay on the divan. I stared at the carpet.  I saw the pieces of glass from the broken lamp.  And when I got up to walk across the room, I felt the pain, the sharp agony of the flesh of my feet torn by my own weight. It hurt with a deserving pain. My feet were cut when I put on my shoes and walked out of that apartment and into the bright astonishment of the night.  Limping, I walked the long road to my room.  I thought I would never see Camilla Lopez again.

By the end of the novel, we’ve come to understand the Camilla is just as damaged as Bandini is, though this does not excuse the men who abuse her at all.  While some readers may have trouble with this aspect of Ask the Dust; I won’t defend it on that account.  Bandini is a seriously sexist character, often abusive–does that mean John Fante was as well or that Ask the Dust is tainted by this?  It’s damn fine writing in my opinion–the bright astonishment of the night.

Which brings me back around to my introduction and to the book’s introduction. Charles Bukowski, the poet/writer behind Barfly, writes in his introduction that he spent years living a life much like Arturo Bandini’s looking for someone who wrote about that experience in a way that was true to it.  He writes that except for pre-revolutionary Russians, he found not one book among the fiction shelves of the Los Angeles public library until he found John Fante.

But I think Arturo Bandini is simply a variation on a fairly common type.  Did Mr. Bokowski never find  Flanery O’Connor’s Wise Blood?  Nathaniel West’s The Day of the Locust? Knut Hamson’s Hunger? Don Carpenter’s Hard Rain?  These all feature hero’s very much like Arturo Bandini, some even feature the raw kind of writing John Fante employs.  I’d even include F.X. Toole’s short stories, Philip K. Dick’s more realistic fiction, Hans Fallada’s The Drinker and John Kennedy Toole’s A Confederacy of Dunces in the mix today.

I loved all of these books, so it’s no surprise that I also loved Ask the Dust.  Mr. Bukowski and I have that much in common.

One thought on “Ask the Dust by John Fante”