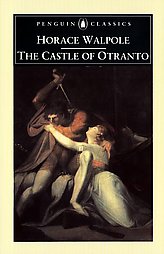 The Castle of Otranto by Horace Walpole is a great huge mess of a story, one that is hard to tell just how seriously to take. According to the introductions, it’s all meant to be taken seriously, but how a 21st century reader can do so, is beyond me.

The story opens with an impending wedding. Manfred’s son, Conrad, a “homely and sickly youth” is to marry Isabella when suddenly a giant helmet falls from the sky smashing him to bits. (I am not making this up, Mr. Walpole is.) Frederic, a handsome peasant boy, is suspected of causing the death through sorcery and is imprisoned underneath the helmet; it is really big after all. Manfred then decides he should divorce his wife Hippolita and marry Isabella, who is now available. Isabella is horrified and runs off to the nearby convent via a secret tunnel. Inside the tunnel she finds Frederic who has escaped the helmet because its great weight broke through the floor of the courtyard into the secret tunnel. At the convent he discovers that the local priest, Father Jerome, is really his father.

Then things get really complicated. There is a painting that turns into a ghost, an ancient curse, a giant, and some other stuff too numerous to mention.

The Castle of Otranto was first published in 1764 and created quite a stir. There had not been anything quite like it before so it is credited with starting the trend of supernatural Gothic novels and with reigniting interest in the middle ages. It must have really set readers on end in its day and it is still an amusing read today, though for different reasons. I can’t say that you’ll find anything moving in The Castle of Otranto or even anything frightening, but it is still a fun read and at under 100 pages it can be an afternoon’s amusement.

Today, some six years since I first published this review on my old blog, Ready When You Are, C.B., I have no memory of  this book.  But it does sound kind of fun

4 thoughts on “The Castle of Otranto by Horace Walpole”