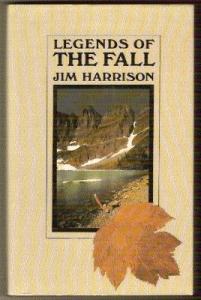 Legends of the Fall by Jim Harrison follows the life of Tristan Ludlow, the only brother of three to survive the Great War physically intact. His younger brother, Samuel, the apple of his mother’s eye, dies in France while his older brother Alfred is wounded in an accident and sent home before he reaches Europe.

Tristan survives physically but emotionally he never fully recovers. He escapes an asylum in France, where he is sent after scalping six German soldiers, and takes up work as a weapons smuggler for the English spending the next several years at sea. He travels the world, winning medals from the English while smuggling various types of contraband for his own profit. Years later he returns to his father’s ranch to find that his brother has married the wife he abandoned. Alfred ends up a senator for Montana; Tristan remarries and takes over running the family ranch. Things go very well for everyone for a time. He is deeply in love with his new wife; they have several children; he makes his father’s ranch a success.

Returning from a trip to town with his wife’s shopping and with several carloads of newly illegal whiskey Tristan is stopped by federal agents along a narrow stretch of road. The agents fire several shots into the air and calmly inform Tristan and his men that they will have to surrender the whiskey they are smuggling. Then they all see that Tristan’s wife sits dead in the front seat of the car; a bullet ricocheted from somewhere into her forehead. This second round of loss moves Tristan to another round violent revenge and to life on the run as an outlaw smuggling whiskey.

Tristan faces severe loss several times throughout the novel. Each time he is aware that the person killed, his brother, his wife, is the better person, that he is the one who should have been taken. This compounds his sense of loss and complicates how the reader judges his reaction. His brother dies an innocent, a life wasted in a battle that was never his. The same thing happens to his wife; that her death is accidental does not lessen it’s impact. (I gasped when I read it.) Tristan is far from perfect to begin with and I doubt his life would have been exemplary under the best of circumstances, but the events of the novel make it difficult to judge him harshly. He is a very attractive hero/anti-hero to begin with; that the reader sympathizes with him even as he makes mistakes is no surprise.

Legends of the Fall by Jim Harrison is novella length but it’s events and it’s impact carry the weight of a novel.  I’ve not seen the movie, and judging from the cover artwork on my movie tie-in edition I don’t think I care to. The characters in the novella are as real to me as they could get. Seeing them acted would lesson their power in my memory.

I should re-read this book.  In the six years since I first published this review on my old blog Ready When You Are, C.B. I have forgotten most of it, in spite of how powerful I appear to have found it and how memorable I claimed the characters were.   I’m going to take my advice and not watch the movie, though.  This one sounds like something I would enjoy the second time around.