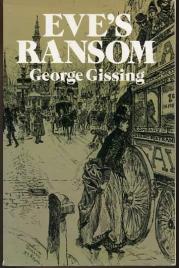 Mr. Gissing’s hero is an intellectual but also a working man. Maurice Hilliard works as a draughtsman, drawing an endless series of machine designs and details for two pounds a week, while dreaming of great architecture and of living without having to work, as he believes a truly free man does. Hilliard gets his opportunity after a chance meeting on the train with Mr. Dengate who once owed Hilliard’s father money. Hilliard’s father died while Dengate was in bankruptcy and since the debt was too small, Dengate never repaid it. Young Hilliard shames Dengate by repeatedly insulting him. To prove his own worth, Mr. Dengate repays the entire sum, 436 pounds. Dengate believes Hilliard will waste the money on drink and says so, but Hilliard has other plans. He intends to live as a free man, without working, for as long as the money will last. He may have to go back to drawing gear parts at two pounds a week, but he will have had a period of freedom to remember and draw strength from.

George Gissing is known as a Victorian realist, and in this fashion he details how Hilliard is able to live free on less than one pound a day. Hillaird goes to London and then to Paris, but returns to his family home Dudley out of loneliness. He sees a photographic portrait of a beautiful young woman in his land-lady’s album and decides to find her though she has moved to London. Through some effort on his part he is able to find the young woman, Eve, and to make her acquaintance. She is living on the money she makes as a book keeper, one pound a week, and is just about at the end of her rope. Mr. Gissing often writes about the experience of the low paid educated class and how demoralizing it can be. Eve is ready to give up, when Hilliard comes to her rescue. It’s not quite clear exactly what he is rescuing her from, there is an unnamed man involved, and Hilliard does not press her for details. Eve is clear that she can never marry a man like Hilliard because he does not have enough income; she views marriage to a poor man as a fatal trap, but she does go with Hilliard to Paris once he offers to pay her expences and to take along her friend Patty Ringrose. Of course, in Paris, Hilliard begins to fall in love with Eve and to see that he must pursue something other than living free before his money runs out.

This is an awful lot of plot for a 110 page novel, but consider that it first ran as a series in a newspaper where plot is king. The prose is sharply paced, the plotting quick and east to follow. The characters are well drawn, typical people one might expect to meet in real life even if they are rather angst filled. George Gissing’s world is very realistic on a day to day level, he was certainly no romantic, but he does not take his characters to the deep levels of despair here that he has in other novels such as The Odd Women. His sexual politics, while forward thinking for a man of his day, are a bit dated now, and it is somewhat hard to feel much sympathy for Hilliard’s desire to live free. (I was very happy when he finally got a real job and started making his way in the world.) However, it was shocking to realize how little money was really necessary to satisfy Hilliard’s desire, just 300 pounds a year and he could have the life he longed for. If you want to know what life was really like in Victorian England, it would be difficult find a more realistic portrayal of it than Mr. Gissing gives.

If you have never read George Gissing, and you probably never have, you’ll find much to enjoy in a Eve’s Ransom, but you’re probably better off reading The Odd Women or New Grub Street instead. Both are richer reading experiences and both show Mr. Gissing’s talents in a better light.

This review first ran on my old blog Ready When You Are, C.B. back in 2008.  I don’t think I read (or re-read) anything by George Gissing since then, though I intended to.  I even have a few of his book on my TBR shelf, where they’ve been for a very long time.  Maybe someday.

One thought on “Eve’s Ransom by George Gissing”