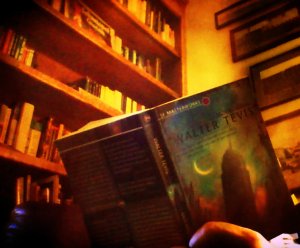 “Reading is too intimate,” Spofforth said.  “It will put you too close to the feelings and the ideas of others.  It will disturb and confuse you.”

I was beginning to feel a bit frightened.  It was not easy to be in Spofforth’s presence, and to listen to his deep, authoritative voice and not want to be obedient, and unquestioning.  But I remembered something I had read in a book: “Others can be wrong too, you know,” and I held on to that.  “Why should it be a crime to be disturbed and confused? And to know what others have thought and felt?”

Spofforth stared at me.  “Don’t you want to be happy?” he said.

A powerful argument against reading in general or a common argument against reading certain kinds of books.  How many times have you heard someone say they don’t want to read a particular book because of the emotions it will produce, because it will confuse and disturb them?  Don’t you want to be happy?  Read only happy books.  Read nothing at all.

In Walter Tevis’s science fiction masterwork, part of the Gollancz SF Masterworks series, the small number of humans who survive no longer read, no longer know how to read.  Centuries ago, humanity began to turn parts of their lives over to robots and computers.  Don’t want to cook and clean, get a robot to do it for you.  Don’t want to decide how to control overpopulation, put a computer in charge of the decision.  Eventually, a super intelligent computer/robot named Spofforth, one of the very few Make Nine robots ever built, finds himself in charge of humanity, though humanity doesn’t seem to know it, or to remember it.

Spofforth has done all he can to give humanity what they want.  They have safe, comfortable lives.  There is no stress in their world. No one ever bothers them or upsets them.  So why are so many of them killing themselves and why does Spofforth want nothing more than to end his own life.

When Spofforth discovers Bentley, a human male who has taught himself how to read by studying old children’s books he found in an abandoned library, he gives Bentley the job of translating an archive of silent movies to audio tape.  Bentley, a professor in his previous occupation, spends his workdays watching classic silent movies and speaking the inter-titles into a recorder.  Over the weeks he spends in the dark he begins to realize that the way people once lived is not at all like the way they live now.  People used to have families.  There used to be lots of children about.  People used to meet and fall in love, they used to talk to each other in couples and in large groups.  They even used to read books.

Bentley likes to visit the zoo in the afternoon.  After he has begun to realize how different the world once was, he begins to see the zoo for what it really is.  The children he sees there turn out to be the same set of five low-level robots who are always there, programmed to give the adult humans the illusion of children at play.  Even the animals are robots.  Robot pythons move about their cage which makes them better viewing than the real thing which slept all day.

When he meets Mary Lou, a young woman who makes her home in the reptile house, Bentley begins to form a plan to run away from the city and live like the couples he sees in the silent movies do.

When he begins teaching Mary Lou to read, Spofforth steps in….

The best dystopian science fiction makes the reader think not just of the future but of the present as well.  Walter Tevis’s future is a bit like the animated film Wall-E but without the comic tone.  His humanity has surrendered itself in the name of peace and comfort.  While Bentley discovers love in old film, just as Wall-E does, Bentley quickly realizes the knowledge and experience he needs is to be found in books, in the printed word.

I enjoyed Mockingbird quite a bit.  I found the setting of near empty cities haunting.  I enjoyed Bentley’s process of discovery and the romance between him and Mary Lou.  The ideas Tevis raises in the course of his novel interested me as well.  I’ll be honest here and admit how critical I am of readers who never venture into reading that may ‘disturb and confuse.’  The distance between not being willing to and not being allowed to just never seemed all that great to me.  Spofforth created a world humans ultimately couldn’t live in by giving them just what they wanted, or what most of them seemed to want.  The utopia Spofforth created is apparently free of both confusion and disturbances.  His world is so wonderful, few people can stand to live in it.

However, it makes for very good reading.

4 thoughts on “Mockingbird by Walter Tevis”