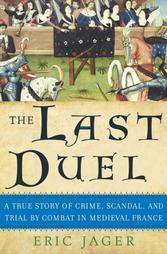 The Last Duel: A True Story of Crime, Scandal, and Trial by Combat in Medieval France by Eric Jager tells the story of the duel to the death between Jean de Carrouges and Jacques Le Gris. Le Gris was accused of forcing his way into Carrouges home and raping his wife Marguerite. Carrouges and Marguerite take their search for justice all the way through the medieval legal system until they reach its penultimate level, trial by combat. The mystery around the crime, the legal maneuvering and the duel itself make compelling reading and provide ample opportunity for the author to cover a wide range of medieval history.

There’s a lot here to interest history buffs. Eric Jager goes into great detail about how a medieval trial by combat was conducted. It took a long time to end up facing one’s accuser in the arena. The accused, Le Gris, had ample opportunity to walk away a free man. He was officially a clergyman, though also a knight, and could have demanded a trial in the church courts which surely would have vindicated him. However he wanted to prove his innocence to everyone for all to see. Was he innocent?

The participants in the trial by combat really believed that God would reveal the truth by granting victory to the innocent party. It’s difficult to see why Le Gris would demand trial by combat if he was guilty. Should he lose his reputation would be ruined, he would die of course, and he would be condemned to hell for all eternity. It’s equally difficult to see why Carrouges and Marguerite would take their case to trial by combat if there had been no rape. If Carrouges should lose, it would prove that Marguerite had lied which would be punished by immediate burning at the stake. All of this makes for a very suspenseful battle scene at the end of the book.

The pomp and ritual of the trial is also very interesting. Eric Jager explains each step of the process in fascinating detail. The audience for the duel was a large cross section of medieval Parisian society. Everyone wanted to see it since no one could remember the last time a duel had taken place. People lined up to get in well before sunrise. The audience was forbidden to stand once the duel began and forbidden to cheer or speak or make any noise at all. The penalty for standing was the loss of one hand; the penalty for speaking was death. They sat in rapt silence as the duel dragged on throughout the day.

I cannot give any more away without spoiling something so I’ll stop there. The Last Duel by Eric Jager has much to offer fans of both history and mystery. It’s a 14th century Law and Order that I found harder to put down the more I read. I’m giving it five out of five stars.

In the years since I first published this review on my old blog, Ready When You Are, C.B., I have often seen The Last Duel for sale in by second hand and first run books stores.  I’m glad to see that it’s still in print, still around, still finding an audience.  It’s a fascinating story and a perfect counter-argument to those who claim history makes for dull reading.